The Hungry Ghost Festival is here once more, and during each lunar 7th month, it’s said that the “hell gates” will be open for spirits to roam freely while believers pay their respects to them through the burning of paper offerings.

So… what does the Ghost month have to do with property, anyway? Well, we’re certain that almost everyone has heard a ghost story or two, about infamous “haunted” places such as Pulau Tekong, or even dared a friend to go on a night trek to the supposedly haunted Red House (not the seafood restaurant or the bakery) while hanging out at a chalet in Pasir Ris.

This time, we’re bringing the spooky stories closer to home — here’s a list of HDB estates and spooky neighbourhoods with chilling backstories.

Since the 1990s, there have been whispers of an infamous suicide case where a woman threw her 3-year-old child from the 25th storey and leapt to her death. She was wearing a bright red dress and had written “It’s not over, darling” in Mandarin on the wall in her own blood.

But that’s not all.

According to online sources, it seems that the couple had been having money issues and the husband had a mistress on the side. The husband owed loan sharks money and wanted to divorce his wife, but she refused.

After the incident, the husband was unable to sell the house, so his mistress moved in and they had a son together. When the son was three years old, he started to play with an imaginary “kor kor” (older brother).

Things escalated, and one night, the couple saw the son standing at the window, the grilles mysteriously pried open. Laughing, the boy waved goodbye and jumped…

Enjoy regaling your guests with spooky stories of your neighbourhood? Look for properties in Bedok North Avenue 4 to amp up those feels.

Browse all Bedok North Avenue 4 units for sale on PropertyGuru. 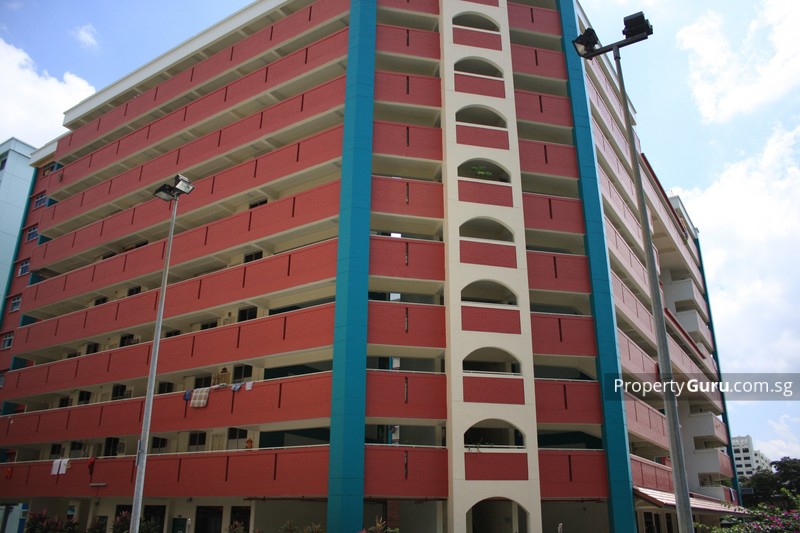 Naturally, the neighbouring residents were curious, and the mysterious empty block became a hot topic. What better use of an unoccupied HDB block than for a quarantine facility? During the SARS outbreak in 2003, the block temporarily served this purpose before its units were converted into 1- and 2-room rental flats.

All was well until 2009, when a mentally unstable woman stabbed her 14-year-old daughter to death.

Today, there are still people living in the block and none would be the wiser about its sad history. The building, newly repainted and refurbished, is now decked out with wall murals and sculptures of Chinese zodiacs; there’s even a dragon playground.

The estate is now refreshed, so there’s nothing to worry about. If you want, browse Woodlands Street 83 units for sale on PropertyGuru to explore the area’s storied past.

You couldn’t enter Neo Tiew estate today even if you wanted to, as the abandoned HDB town is now used for military training.

Neo Tiew Estate had noble beginnings — it takes its name from businessman Neo Ao Tiew, who contributed greatly to the development of the surrounding Lim Chu Kang area. He helped to build hospitals, roads, and even founded Qihua Primary School.

When the Japanese invaded Singapore in 1942, he even mounted a defence of the area, but eventually had to flee to China to escape persecution. His 45 family members in Singapore — including a newborn baby — were executed by the Japanese.

In the 1980s and 1990s, Neo Tiew Estate was a self-sufficient HDB district, with a playground, wet market, shophouses and 2 four-storey blocks. Its hawker centre was also a favourite among those who did their National Service in the army camps nearby.

It’s said that pontianaks (Malay female ghosts that live in banana trees) dwell there. According to tales, a gambler stuck seven needles into a banana tree, forcing the pontianak to provide him with winning lottery numbers. However, he failed to remove the needles after he won his prize, and this angered the spirit who now roams the estate, looking for victims.

Scary fable or not, this old HDB estate is very much part of the Singapore story. While you can’t stay there anymore, why not consider the neighbouring Choa Chu Kang?

Browse all Choa Chu Kang units for sale on PropertyGuru.

The Siglap area is probably best known for its private property, Good Class Bungalows, as well as proximity to East Coast Park and some of the best food in Singapore (east side, best side?).

Hipster veneer aside, it does have some dark secrets of its own — and literally, because its name, Si Gelap, means “the dark one” in Malay, as the sky turned eerily dark one day in 1821 (it was later found out that this was due to a solar eclipse).

There’s a cemetery in Siglap, which is normal enough, until you realise that some of the graves in the 90-year-old sanctuary are dedicated to supernatural beings from Malay folklore, known as the Orang Bunian.

Harking back to the dark days of the Japanese Occupation, Siglap also bears the scars of that time through mass graves found in the area called “Valley of Tears” as well as off Evergreen Avenue.

In the olden days, the kampongs here were also said to be haunted by pontianaks, also owing to the many frangipani trees growing in the estate (it’s said that the smell of the flower indicates the spirit’s presence).

The town is now swanky, hip and chock-full of good food. Browse all Siglap properties for sale on PropertyGuru now.

With the popularity of the Rail Corridor, many people now pass by the old flats at Spooner Road, which were built in the mid-1970s. These are now rental homes for low-income residents, but they once served as quarters for employees of the old Tanjong Pagar Railway Station nearby.

For a time, the flats were also vacant, when the railway station stopped operations. Perhaps this was when stories of weird noises, shadows and other disturbances in the blocks started. A resident who has been staying there since 2019 noted strange sightings, sounds of a woman crying and more.

Live close to this historical road, and enjoy treks through the Rail Corridor. Find a home in Bukit Merah now.

Browse all Bukit Merah units for sale on PropertyGuru.

It’s common knowledge that the area that is now Bishan MRT and its surrounding HDB flats used to be a graveyard — one of Singapore’s largest Chinese cemeteries in fact, before it was exhumed in 1982. Yet somehow, despite this forgotten past, Bishan estate is constantly turning out $1 million HDB resale flats, and recently, a Natura Loft DBSS unit at $1.295 million.

Now that Bishan MRT is an interchange for those switching from North-South Line to Circle Line, tons of commuters flow through daily. Although you might note that during your train transfer journey, part of the underground system still smells a lot like wet earth, which can be disconcerting if you give it enough thought.

There have been ghost stories of faceless passengers waiting on the train platform at night, phantom riders without reflections and even an otherworldly funeral procession on the train tracks.

The Bishan MRT area is so populated these days, even if you take the last train home, it’s bound to be filled with “zombified” humans instead of ghouls. Find a property in this convenient location.

Browse all properties near Bishan MRT station for sale on PropertyGuru. 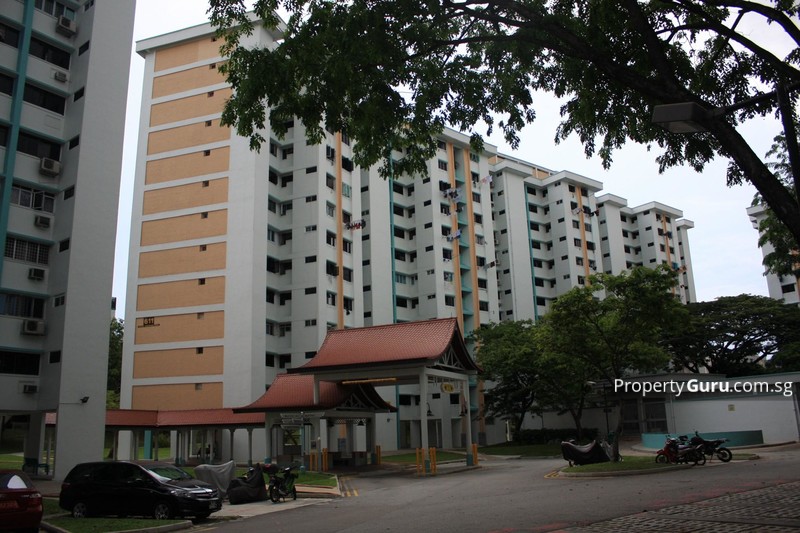 Give nosy neighbours a vacant block, and you’ll be sure the aunties and uncles will begin sharing stories and comparing notes of scary sightings. This was what probably happened to Block 611 Bedok Reservoir Road.

Built in 1981, the block once housed expats and their families in the Government’s bid to attract foreign talent then. However, by 1988, most of the expats moved out (for reasons unknown), and the empty block became a nest of illegal activities such as glue sniffing and drugs. Its fittings were also stolen, and graffiti covered its walls.

To keep people out (both criminals and curious youngsters), HDB put wooden hoardings over the staircases and windows. The block’s mysterious air grew, and residents gossiped, even more so when tales of dark shadows along the corridor, unexplained flickering lights and lurking spirits emerged.

In 1989, HDB refurbished the units and put them up for resale in the early 1990s. Today, the block is once again filled with living neighbours and past hearsay is mostly forgotten.

Bedok Reservoir Road features an excellent jogging spot with good public transport connections. Why not look for your next home in the area?

Browse all Bedok Reservoir Road units for sale on PropertyGuru.

Known as a swamp and formerly a hotbed of gang activity, Toa Payoh is also infamous for its 1981 ritual murders.

A medium who lived on the 7th floor, with the help of his wife and mistress, conducted rituals and killed a 9-year-old girl and 10-year-old boy. They are said to have also drunk their victims’ blood.

According to news reports, the girl was found in a travel bag at the next block. She had been kidnapped from a nearby church, sexually assaulted, drugged and suffocated. The boy, found two weeks after the first victim, was on a grass patch, mere metres from the medium’s block. He had been drugged, choked and drowned — it was the boy’s trail of blood that led the police to the culprit’s flat.

Adding on to the horror, in addition to the flat’s eerie vibe, altar and religious items, police also found vials of blood in the fridge as well as a piece of paper with the 2 victims’ names.

Despite this, the flat was sold to a Catholic family in 1987, who struck 4D in the month they moved in. The unit was sold again in 2005 and was rented to foreigners. It’s unclear who stays in the property now.

The amenities in Toa Payoh are stellar, given that it’s a mature estate and the first satellite town in Singapore. Move into Lorong 7, which boasts a bountiful market and food centre, good schools, and more.

Browse all Lorong 7 Toa Payoh units for sale on PropertyGuru.

Is Loyang in Singapore Haunted?

Loyang is famous for its Pasir Ris Red House, located at 191 Jalan Loyang Besar. After being left vacant for decades, the building was renovated and is now the site of a high-end preschool. Surely the joyous sounds of innocent children will be enough to cleanse the spirits of the past?

Where to Buy a Haunted House in Singapore?

There’s no “haunted house” category on our PropertyGuru listings page, but if you want the next best thing, why not consider buying an old freehold property? With cobwebs in the corner, peeling paint on the walls and a long history, anyone with a healthy imagination can spin tales to neighbours within earshot.

Other than being a theme park, there’s an old story about Haw Par Villa that it was visited by a bomoh (witch doctor) who would summon spirits to do his bidding. These spirits then possessed the statues in the park as they had nowhere else to go. But you decide.