I’ll admit that I’m slightly envious of those who can afford a Sentosa Cove bungalow.

How nice it would be… beachfront views, wide open spaces, lazy brunches whenever I feel like it, the exclusivity and tranquility of island life, perhaps even my own yacht to boot. Sure, it’s more difficult to access the mainland—but with that kind of money, one wouldn’t need to work, right?

The first land parcels on this luxurious residential-cum-marina resort development were released in 2003, and today the man-made island is home to over 3,000 residences.

Since its launch, Sentosa Cove has been marketed to foreigners—also because it’s the only place where non-Singaporeans can buy a landed home. Naturally, this drove prices up. In 2012, a Sentosa Cove bungalow could fetch as much as an eye-popping $3,214 psf.

Everyone who had the extra moolah wanted a piece of Sentosa Cove — it was the combined effort of renowned French architect Bernard Spoerry who created the famed seaside town of Port Grimaud in France, as well as McKerrell Lynch Architects from Australia, and Klages, Carter & Vail from the United States.

Sentosa Cove was poised as Singapore’s answer to Monte Carlo, which is known for its affluence and massive yachts piloted by the rich and famous. In addition, global buyers could design and build their dream homes from a blank canvas, instead of purchasing a pre-fab home.

Recently, there have been reports of property prices in Sentosa Cove taking a hit. Could Sentosa Cove’s glory days be over?

The government also introduced a series of property cooling measures. Take the Additional Buyers Stamp Duty (ABSD) for example. For foreigners, what was previously 0% before the implementation in December 2011, became 10% after, and subsequently 20% in July 2018.

Condominiums on Sentosa Cove seem to be the most affected — in fact, one condo was sold at a 50% loss last year. Ouch.

But high-net worth buyers who can afford to splash out $33.3 million — the price of a freehold Good Class Bungalow on the Singapore mainland sans the sea view — on a bungalow probably aren’t bothered, plus these tycoon types typically own multiple properties. These buyers can ride out short-term market fluctuations, say analysts.

Bungalows are also a more sought-after and premium property class on Sentosa Cove, given that there are only about 300 bungalow plots but an estimated 2,8000 condo units.

The landed homes in Sentosa also have potential upside due to the development of the Greater Southern Waterfront and upgrading of the Integrated Resorts.

So should you still consider buying a property in Sentosa Cove? Let’s take a look at the 10 cheapest bungalows in this fancy pants enclave.

Here’s a quick summary of the 10 cheapest bungalows in Sentosa Cove, as listed on PropertyGuru:

Some of these properties have a lower psf than others, which means you get more space for the same price. In addition, some are partially furnished, so that’s some money saved or less effort needed on your end.

But as you can see, you’ll need about $10 million to buy a bungalow in Sentosa Cove no matter what. That works out to a mortgage of about $28,000 a month.

Let’s take a closer look at each property below: This partially furnished beat is located in the serene Paradise Island area, away from the main stretch of Sentosa Cove.

At $1,404.85 psf, it’s a pretty good deal, considering that some landed properties on the main Ocean Drive stretch are going at over $2,000 psf.

This 2.5-storey corner home includes a utility/maid’s room for 2 helpers, a private berth for your yacht, swimming pool and roof terrace.

This unfurnished bungalow in Paradise Island is slightly more expensive than the previous listing per square foot, but it might be well worth the price.

The property offers a 25m frontage towards the waterway, as well as a car porch with store room, swimming pool with sun deck and private yacht berth. There are rooms for 2 helpers, and 2 of the bedrooms are connected to a shared terrace that overlooks the marina waterway. There’s also a roof terrace, linked to the junior master bedroom in the attic. 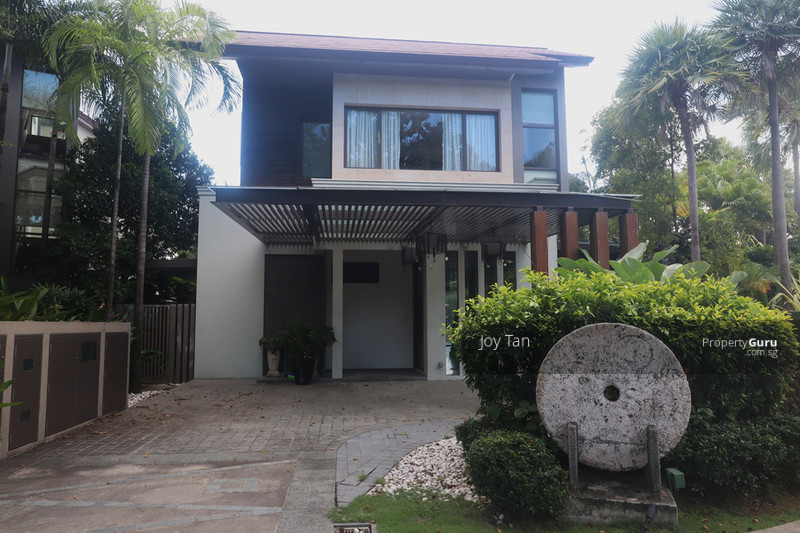 With a psf similar to the previous listing, this unfurnished 2.5-storey bungalow in the Paradise Island locale has good amenities such as a private yacht berth, swimming pool with deck and 25m frontage towards the waterway.

The dining area opens out to a zen garden, there’s a gourmet/dry kitchen, and a wet kitchen with a yard. Other features include a helper’s room, a junior master bedroom in the attic and roof terrace. 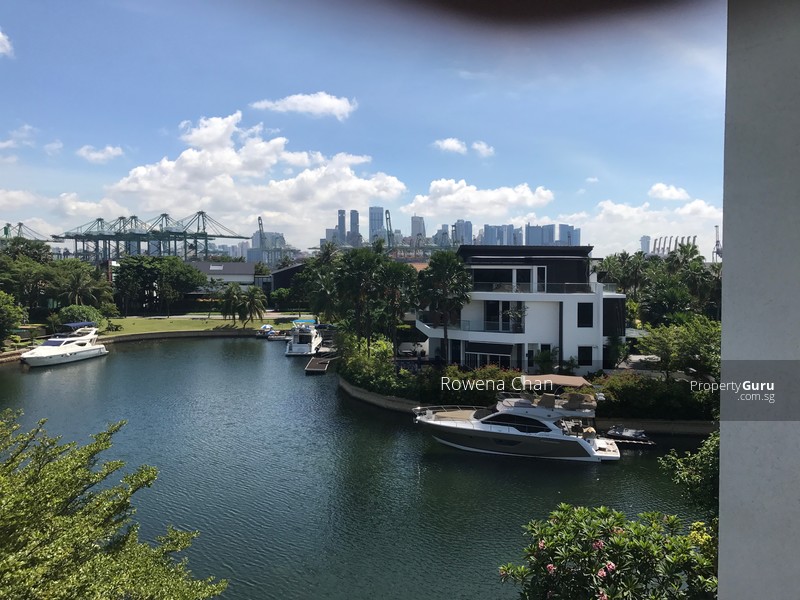 This is one of the more expensive options in our “10 cheapest” list by psf (just slightly more), but this partially furnished property boasts an unblocked view of the waterway.

Luxuriate on your outdoor patio, with a glimpse of the city in the distance — how nice indeed, to be so close yet so removed from the hustle and bustle of the concrete jungle. 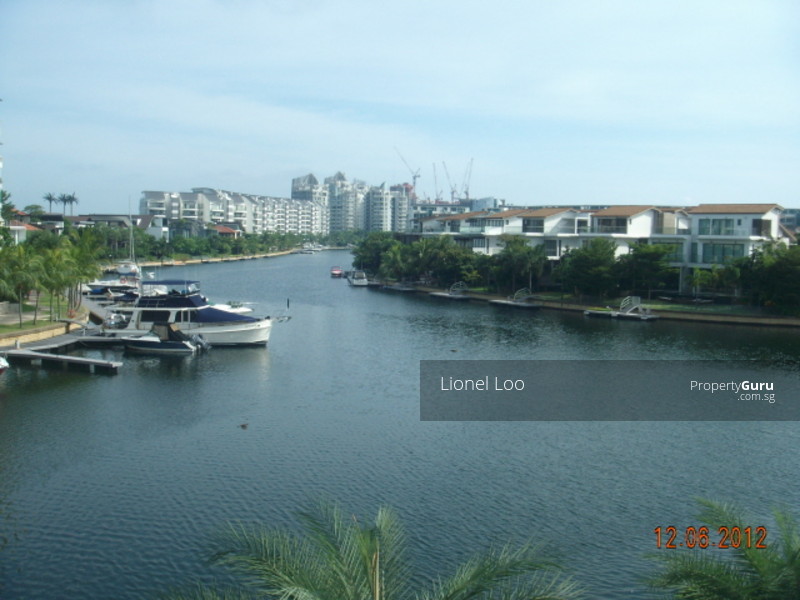 Here’s yet another listing with unblocked views of the waterway, but by far one of the lowest priced, by psf. While the overall price of $9,900,000 remains the same, there’s larger land space for you and your family.

It’s also partially furnished, so you can move in ASAP. According to the listing, this house has a “super wide frontage” and good Feng Shui too.

On weekends or on lazy evenings, the folks can bond over a barbecue on the rooftop garden. This unfurnished 2.5-storey bungalow is what you’d expect to pay based on psf, and homeowners will have a 25m frontage towards the waterway.

The property comes with a car porch with store room, swimming pool with deck and private yacht berth. Take a stroll in your zen garden after meals, and prepare gourmet feasts in the top-notch kitchen.

There’s also a roof terrace from which you can take in all the views of this waterfront home. This 2.5-storey bungalow is unfurnished, with the usual cookie-cutter touches as mentioned above: A car porch with store room, swimming pool with deck, private yacht berth, dining area opening out to a zen garden and roof terrace.

If you’re looking for this type of home, you can definitely view all of these similar listings and pick your favourite of the lot. 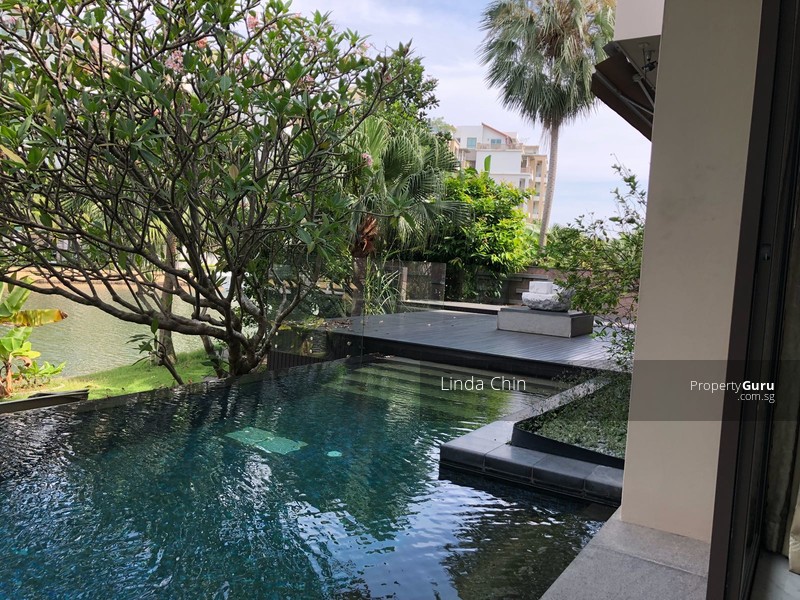 Even as we breach the $10 million mark, this home in Coral Island looks pretty good with a psf that’s below the usual $1,400. The land area for this property is also bigger, and this is one of the overall cheapest listings in Coral Island right now.

If you’re into Feng Shui, this house faces north west, which means that the corresponding element is metal. This can bode well for the occupants’ health, wealth and prosperity.

Other features of the house include a private infinity pool and a private berth for your yacht. This 2.5-storey detached house is slightly cheaper by psf as compared to the previous listing in Coral Island. The overall selling price is the same, but you’ll get 1 sq ft of land more.

Oriented towards the waterway, you’ll have enough room to park your 3 to 4 luxury cars, swim in your private pool and moor your yacht at the yacht berth. Other amenities include a walk-in wardrobe in the master bedroom and a barbecue pit at the roof terrace. 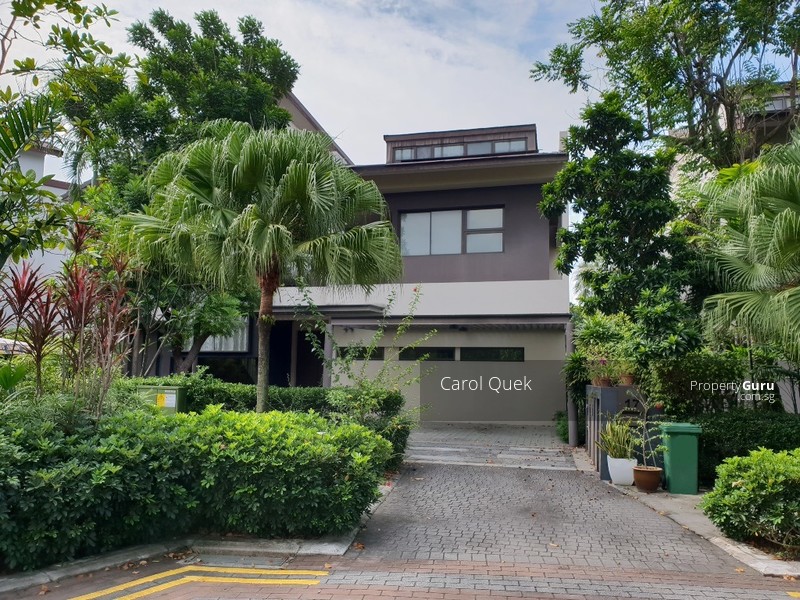 This may be the last listing on the “top 10 cheapest” properties in Sentosa Cove, but there are many more “atas” (high-end) homes available on Singapore’s most famous southern island.

Like the other Coral Island properties, this unfurnished bungalow breaches the $10 million mark, but ever so slightly. It’s practically the same as listing #9, in terms of specifications — yes it also has a swimming pool and private yacht berth.

After going through listings for bungalows in Sentosa Cove, it seems that even different locales of this high-end island are priced differently.

For example, bungalows in Paradise Island are the cheapest overall, as compared to those in Coral Island and Treasure Island (these properties didn’t even make our list). However, the Coral Island properties — while they cost a bit more — tend to be larger, with a lower psf.

I’ll probably never be able to afford such a home in my lifetime, but if you’re wealthy and have the cash to spare, you might want to consider the more expensive options in the region of $13 million and above. Those definitely look more luxurious and unique than the “cookie cutter” units with similar features we looked at.

Bungalow prices in Sentosa Cove range from just under $10 million to a whopping $78 million for a GCB with sea view.

With over 200 listings for a bungalow in Sentosa Cove, I’d say that the prospective buyer has an ample pool (pun unintended!) to choose from. In addition, some listings are as old as 6 months, while there were 19 new listings in the past 24 hours. There are also a couple of bank sale listings going for cheap, but they don’t seem to be getting snapped up.

Could this mean that as supply increases further, prices might be more affordable in the future? I’d keep my eye on property prices in Sentosa Cove for now — but to me, it feels like this is an opportunity for buyers.

Disclaimer: Prices and listings accurate at the time of writing (10 June 2020).