Ang Mo Kio’s name has been the subject of debate for several years. Some claim that Ang Mo Kio, which translates to ‘Red-haired Man’s bridge’, was named for the two bridges in the area during Singapore’s colonial rule. Others argue that it was named for the many rambutan trees that used to grow in the area. Rambutans are hairy red fruits and were commonly sold alongside vegetables in grocer stands. These vegetables were called ‘kio’ in Hokkien, which eventually lent its name to the neighbourhood.

At the forefront of most people’s minds when they think of Ang Mo Kio is AMK Hub and Jubilee Square. However, there is also a third and much lesser known mall that focuses on the more niche aspects of community life: Djitsun Mall.

It is the second ‘Djitsun Mall’ in Singapore, with the other being located in Bedok. With the popularity of AMK Hub and the convenience of Jubilee Square, Djitsun Mall AMK seems to face some tough competition.

So, how does the youngest shopping mall in Ang Mo Kio measure up to its older siblings?

A brief background of Djitsun Mall

Developed by OEGroup, Djitsun Mall was named after OEGroup’s founder, Lim Djit Sun, and was officially opened on August 2013. It has 4 levels, with most of the shops and restaurants making up the first floor. Djitsun Mall is located at 5 Ang Mo Kio Central 2, Singapore 569663.

You can reach Djitsun Mall by taking buses 50, 159B, 128, 159 and 265, although there is a short two-minute walk. Alternatively, you could drop at Ang Mo Kio station and walk over, which spans a slightly lengthier distance. According to Google Maps, the estimated time from Ang Mo Kio station is approximately six minutes of walking.

If you’re feeling peckish but don’t have the wallet for an expensive meal, Djitsun Mall is a great place to visit. With restaurants such as Buddy Hoagies, Xin Wang Hong Kong Cafe, and Eighteen Chefs, each meal will only set you back about $15. While Buddy Hoagies employs a more American style, Xin Wang Hong Kong Cafe provides a slice of Hong Kong ‘cha chaan teng’ fare. Eighteen Chefs, on the other hand, is a social enterprise restaurant that includes ex-convicts amongst its staff. The owner, himself an ex-convict, hopes to reintegrate these people back into society.

Since Djitsun Mall focuses more on lifestyle experiences, it doesn’t offer much in the way of groceries. For those, you can head to AMK Hub, which has a Fairprice Xtra, or the Fairprice right outside Jubilee Square. If you’re just looking for a quick bite, the large variety of eateries in the vicinity will satisfy your cravings easily. There are numerous coffee-shops in the area, not to mention the restaurants in Jubilee Square and AMK Hub.

There aren’t a lot of retail shops here, as Djitsun Mall’s stores are largely catered towards lifestyle amenities, such as hair salons, nail salons, skin care centres, and tuition schools. Those who are looking to pamper themselves will be glad to know that everything is located in one place.

The second floor is taken up entirely by Harvey Norman, which supplies a huge selection of household and electronic products. The electronics store sells a great variety of products, ranging from the latest computers to kitchen appliances such as ovens, microwaves, refrigerators and even ice cream makers.

The megastore sells more than just electronics. Furniture such as sofas, tables, cabinets, and mattresses are also sold there. If you’re looking to replace a faulty device or looking to furnish your new home, you can count on Djitsun Mall to find whatever you need.

You might want to check out The Panorama, an upcoming condominium that makes Djitsun Mall even more accessible!

For those scratching their heads at the word ‘edutainment’, no, that’s not a typo. “Edutainment” is a wordplay combination of education and entertainment. It refers to educating through entertainment. The term was coined by Walt Disney, who aimed to promote education through television shows. Sesame Street is one of the most popular edutainment shows.

Now, edutainment has broadened its borders to encapsulate Youtube channels, toys, and even museums.

Djitsun Mall aims to provide education in the same way but through other mediums. Yamaha Music School and The Ballet School offers classes for all those looking to enhance their musical and dance skills. These schools are located on level three. In addition, there are student enrichment centres such as Budding Minds Education Centre and MPM Maths.

For those whose children show interest in becoming the next Picasso, Think Creative aims to nurture their talents and potential. The company helps instill an appreciation of art in them and develop their artistic abilities.

The world outside Djitsun Mall

Even outside of Djitsun Mall, there is still no lack of things to do and see. After you’ve dropped off your children at tuition, you can relax at one of the two parks, Ang Mo Kio Town Garden East and West. Both are situated five minutes away.

A bit of light walking around either park will help to digest heavy meals, quell lethargy, and loosen your muscles. Even if you don’t intend to do anything more than sit on a bench, you’ll still reap the benefits of fresh, clean air. Just remember to bring the bug spray. 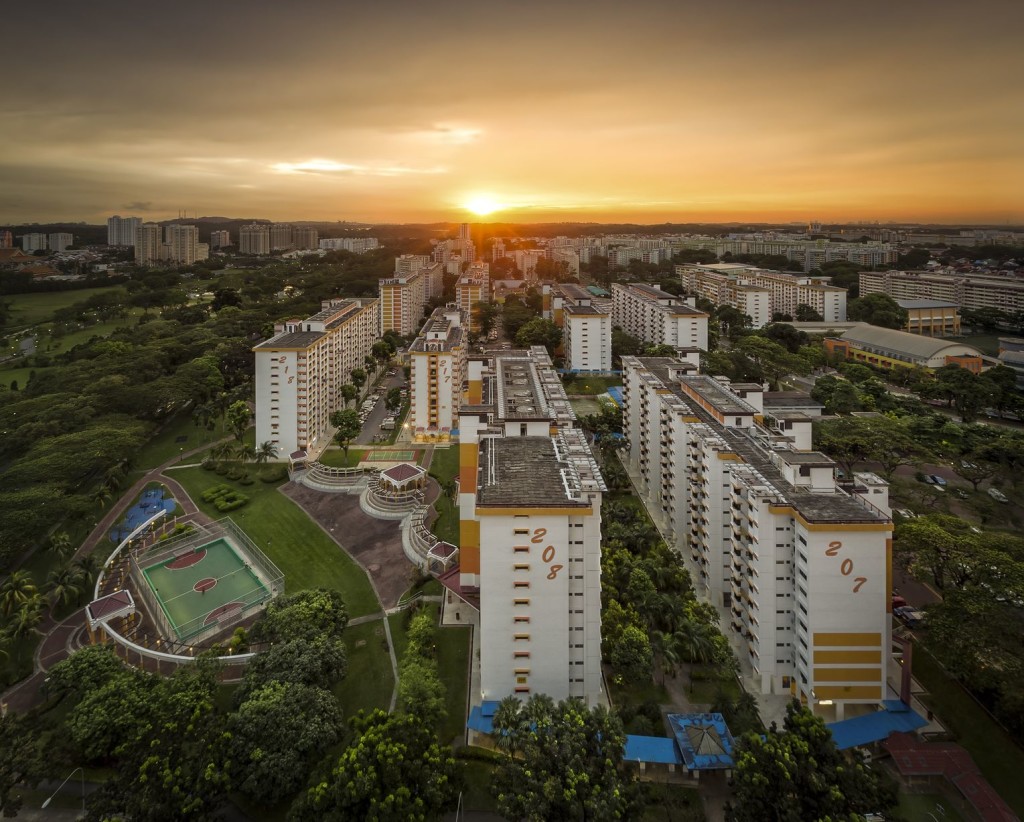 Ang Mo Kio during a sunset.

If being surrounded by nature is your thing, you might want to look at Thomson Impressions, a condominium just a short bus ride away from Djitsun Mall. Ang Mo Kio is a lovely neighbourhood with plenty to see and do. If your preference is towards nature and greenery, Adana @ Thomson is just a short walk away from Lower Pierce Reservoir. Alternatively, you can also look at JadeScape if you’re looking for something nearer to the city centre.

With the combination of incredible malls, bountiful parks and good connectivity to the rest of Singapore, it’s not hard to see why Ang Mo Kio is one of the more popular neighbourhoods.