“When we first got this home, it felt like we’ve finally docked at our harbour,” Song Qiao Jian recalls.

Born and raised in China, Mr Song and his wife, Miss Rain, first came to Singapore in 2015. Before relocating here, the multinational technology company that he works for offered him the chance to relocate to either Beijing and Singapore.

However, after taking into consideration of Beijing’s cold winters, he decided to move to the little red dot instead. Shortly after Song relocated, his wife and their son, then five years old, reunited with him in Singapore.

Back then, the family of three lived in rented condominiums. Without a permanent abode for his family, Song felt like ‘a ship sailing aimlessly in the open sea’ and longed for a place he could truly call home.

While waiting for their PR applications to be approved, Song and Rain began searching for potential homes in Bishan and Paya Lebar based on limited recommendations from the few friends who were also living there.

For years, they rented homes in Yishun, but the distance to the city centre was not ideal for them to have a permanent home. As they were also unfamiliar with Singapore’s different neighbourhoods, the couple struggled to find an apartment that they like.

Want to live in the north of Singapore? Find homes for sale/rent on PropertyGuru now.

Soon, the couple got their PRs approved in February 2019. While they were happy with the new status, they were still disappointed that they have yet to shortlist any apartments.

Fortunately, Rain’s boss, who she calls ‘teacher’ (a colloquial term in China to address someone with higher authority), came to know of their struggle and recommended her trusty property agent, Andass Teu to them.

“Andass has helped my teacher in the past and she assured he is extremely meticulous, efficient, and will not hesitate to go out of his way to ensure that all her requirements are met,” Rain says. “My teacher is a no-nonsense person, so if she says Andass is good, we trust her 100%.”

READ: Your Question Answered: Can A Foreigner Buy Property In Singapore?

“Mr Song and Miss Rain were easy to work with,” Andass admits. “They gave me a specific list of requirements and I just ran with it.”

The couple wanted to live in a condominium that’s near an MRT station in Bishan or Paya Lebar and that’s within their budget. However, they were unsuccessful with their search because property prices in both areas have inflated over the years, making it difficult for them to secure their dream home.

Venturing into the unknown

Being a resourceful agent, Andass recommended an area that would still meet the couple’s MRT proximity requirement (that’s within their budget): Lorong Chuan, a neighbourhood that neither Song nor Rain had heard of.

Fancy living near the Lorong Chuan MRT station? Find all homes for sale on PropertyGuru.

“Lorong Chuan is right smack between Bishan and Paya Lebar, and the condominium prices here are considerably low in spite of its excellent location,” Andass explains.

Sure enough, when Andass brought the family to The Springbloom at Serangoon Ave 3, they were pleasantly surprised. Not only was the three-bedroom condominium right in front of Lorong Chuan MRT station, but the area was also serene – just as the couple wanted.

Though the exterior of the condominium was not as fancy as newer projects, Song and Rain were happy with the bigger living space trade-off. When they were renting, small spaces never felt right with them. 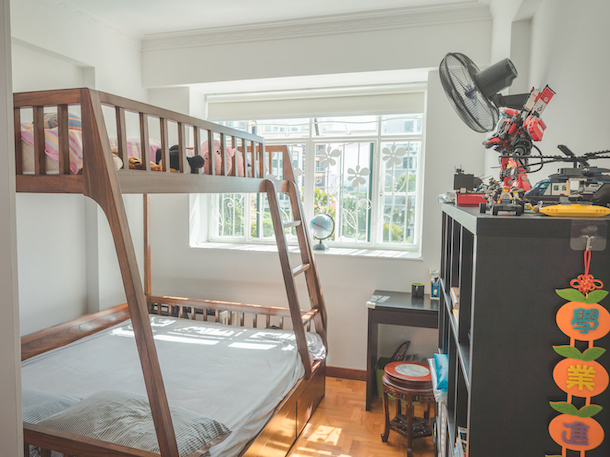 “When I first stepped into the apartment, I felt at peace,” Rain reveals. “I’m not a feng shui expert, but there are certainly some good feng shui vibes around here.”

Happy with what they saw, the couple bought the apartment in March 2019, a month after becoming Singapore PRs. Andass said it was crucial for him to crosscheck his property research on PropertyGuru, because he did not want to leave any stone unturned.

RELATED STORY: A Home Away From Home

“PropertyGuru provided the best tool for me to ensure that I did not miss out any units of a project,” Andass explains. “For example, if Springbloom has five units for sale, PropertyGuru would have all five listings. Other websites would probably only have three or four listings, and that’s risky because what if the unlisted unit was their dream home? They would have missed it out!”

Indeed, Song and Rain now feel that they have their own perfect oasis of a home, a place where they can feel happy and relaxed.

“Home is a harbour,” Song beams. “It gives us a sense of belonging and safety, and having our own place feels like we can finally drop our ship’s anchor – we’re truly at home now.”

With their new spacious home, Song and Rain share that the long, wooden dining table in the living room is their favourite hangout. Apart from having meals with family and friends, it also serves as a place for their son to study, for Song to read his books and for Rain to enjoy her afternoon tea.

“This gathering space is what makes us feel like family, and I’ve purposely made it this way by installing only one Wi-Fi router at home – right next to the dining table,” Song laughs. “When the Wi-Fi connection becomes weak in the rooms, everyone would come out of their rooms to gather here!”