In a joint media release earlier this week (1 June 2020) by the Ministry of National Development (MND) and the Ministry of Manpower (MOM), it was announced that the government will be building new and improved foreign worker dormitories that will house about 60,000 workers by the end of this year.

There will be new quick-build (temporary) dormitories, as well as repurposed state properties like former schools and vacant factories that will be converted into housing for our migrant workers.

This aims to improve living conditions and reduce the density, which will help address several issues that were brought to light by the large Covid-19 clusters in foreign worker dormitories.

Here’s a quick overview of the announcement, as well as the local reception to it.

New and improved dormitories for foreign workers in Singapore

As the name suggests, quick-build dormitories are temporary structures that can be built much quicker than usual. They last 2 to 3 years, and can house 500 to 1,000 people per hectare.

There are 8 sites already allocated for this purpose.

In addition to these quick-build dormitories, quite a few former schools, vacant factories and other unused state properties will be converted into dormitories.

Scroll down to the end of the article for the full list of new dormitory sites.

If you scrutinize the list of upcoming dormitory sites, you’d notice that many are quite near current residential areas. This is especially true for the former school buildings.

Almost as if anticipating backlash, in his address, National Development Minister Lawrence Wong urged Singaporeans not to adopt a “not in my backyard (NIMBY)” mindset.

“In land-scarce Singapore, it’s inevitable that some of these new dormitory sites will be quite near residential areas, so all of us have to do our part to reject the ‘not in my backyard’ mindset,” he said.

What does ‘not in my backyard (NIMBY)’ mean?

NIMBY is when residents oppose to new buildings or structures too close to their homes. Typically, it’s not that the residents object to the idea of the new building (in this case the dormitories), they just don’t want it to be near their residence (in their ‘back yard’).

Many Singaporeans concerned about the announcement

After the announcement, many Singaporeans took to Facebook and other online channels to express concern over having foreign worker dormitories built near residential districts.

A Facebook user named Shawn Lim even made a compilation of these comments in a post that went viral. At the time of writing, his post was shared over 2.7K times and had 278 comments.

There were many recurring themes in the comments, but perhaps the most obvious one was the concern about how these dormitories would affect nearby residential properties.

Should homeowners be worried?

It’s anyone’s guess whether or not these new dormitories will impact nearby housing.

Positive or negative can be subjective

It is known that properties can be positively or negatively impacted by amenities in the neighbourhood. However, aside from amenities like MRT stations that clearly boost accessibility and usually cause a price uplift, whether or not a building is ‘good’ or ‘bad’ can be quite subjective.

For instance, there are folks who view seemingly ‘neutral’ amenities like temples, aged care facilities and even schools as negative. A family with a young child may like the convenience of having a primary school nearby, while another may consider the daily chatter as noise pollution.

Additionally, as Stuart Chng (Senior Associate Executive Director of OrangeTee & Tie and co-founder of Navis Living Group) points out, there are currently already many migrant worker dormitories located as close as 400m from housing estates.

One such example is the S11 Punggol dormitory that’s just a bridge away from homes in the Sumang estate.

In 2014, the Punggol Bayview BTO along Sumang Walk had a selection of ‘special’ units with balconies facing the Punggol-Serangoon Reservoir that many were willing to pay a premium for. But besides the waterfront view, you know what else could be seen? That’s right—the S11 dormitory.

Then, in 2018, land in the same area (Sumang Walk as well) received record high bids for executive condominium (EC) development. The S$509.37 million bid was won by CDL Constellation and TID Residential, working out to about S$6,275 per square metre of the gross floor area (GFA). This EC is none other than Piermont Grand.

Although we are not saying that these concerns are not justified, it is highly likely that the news is sensationalized because of the current Covid-19 situation. It’s probably best not to speculate too much, as the potential impact on residential properties is not the most pressing issue at the moment.

According Manpower Minister Josephine Teo, this strategy aims mainly to reduce the risk of transmission if an outbreak happens again, so the government can respond to it more effectively. After all, during a pandemic, the immediate health and safety of Singaporeans and our foreign workforce are top priority.

Finally, it’s also worthy to note that while these dormitories will be nearer to our homes, they won’t actually be in the heart of residential enclaves.

For those who want the exact locations and address, here’s the compiled list. 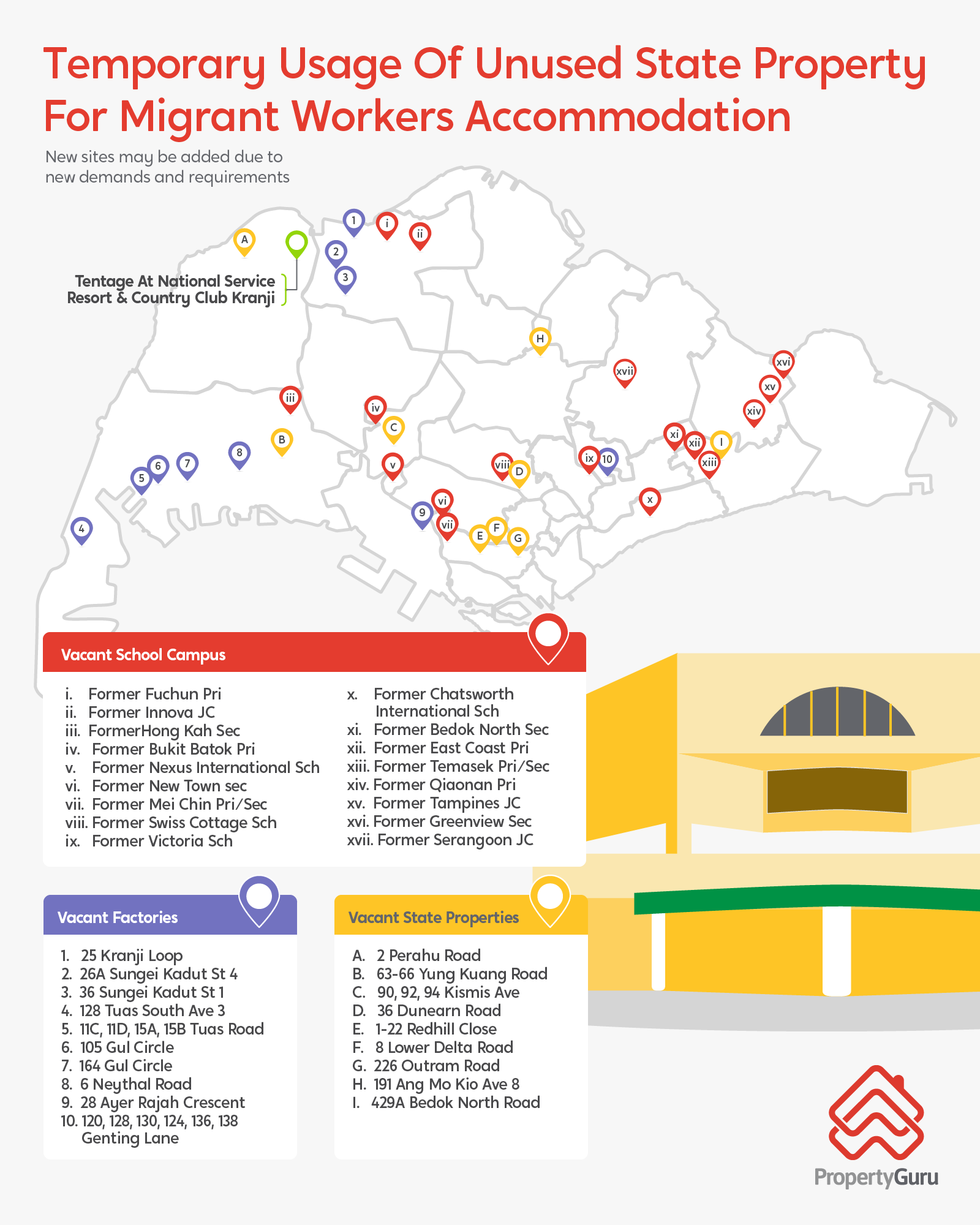 Unused state properties to be converted into foreign worker dormitories: