It’s fast becoming a cliché that Singapore is a playground for the ultra-rich. And in Q3 2019, foreign buyers formed the lion’s share of condo transactions above $10 million, buying 21 out of 32 properties according to Urban Redevelopment Authority (URA). Property prices in the Core Central Region, home to prime residential districts 9, 10 and 11, increased the most in that quarter, rising by 2.0%.

It’s also interesting to note that we’re home to six of the 11 super penthouses around the world currently on sale, according to Sotheby’s International Realty (the others are: Monaco, Miami, New York and Auckland). A recent report from Knight Frank noted that almost 2 in every 5 ultra-high net worth individuals (UHNWI) prefer to buy a new home in Singapore, attracted by attributes such as ease of doing business, tax laws and stable currency.

For the non-landed private residential properties within the Core Central Region (CCR), we observed that the number of listings posted on the PropertyGuru online property portal during the quarter have decreased slightly in the prime districts D9 (-1.9% from Q2 2019) and D11 (-0.3%). This could indicate a buyer uptake exceeding the number of units placed on the market during the quarter.

“Despite our current stamp duty rates, high-end properties in Singapore remain comparatively fairly valued compared to other established cities and are seen as stable assets for wealth preservation. These explains the healthy, consistent uptake of housing stock with luxury positioning in the CCR.” 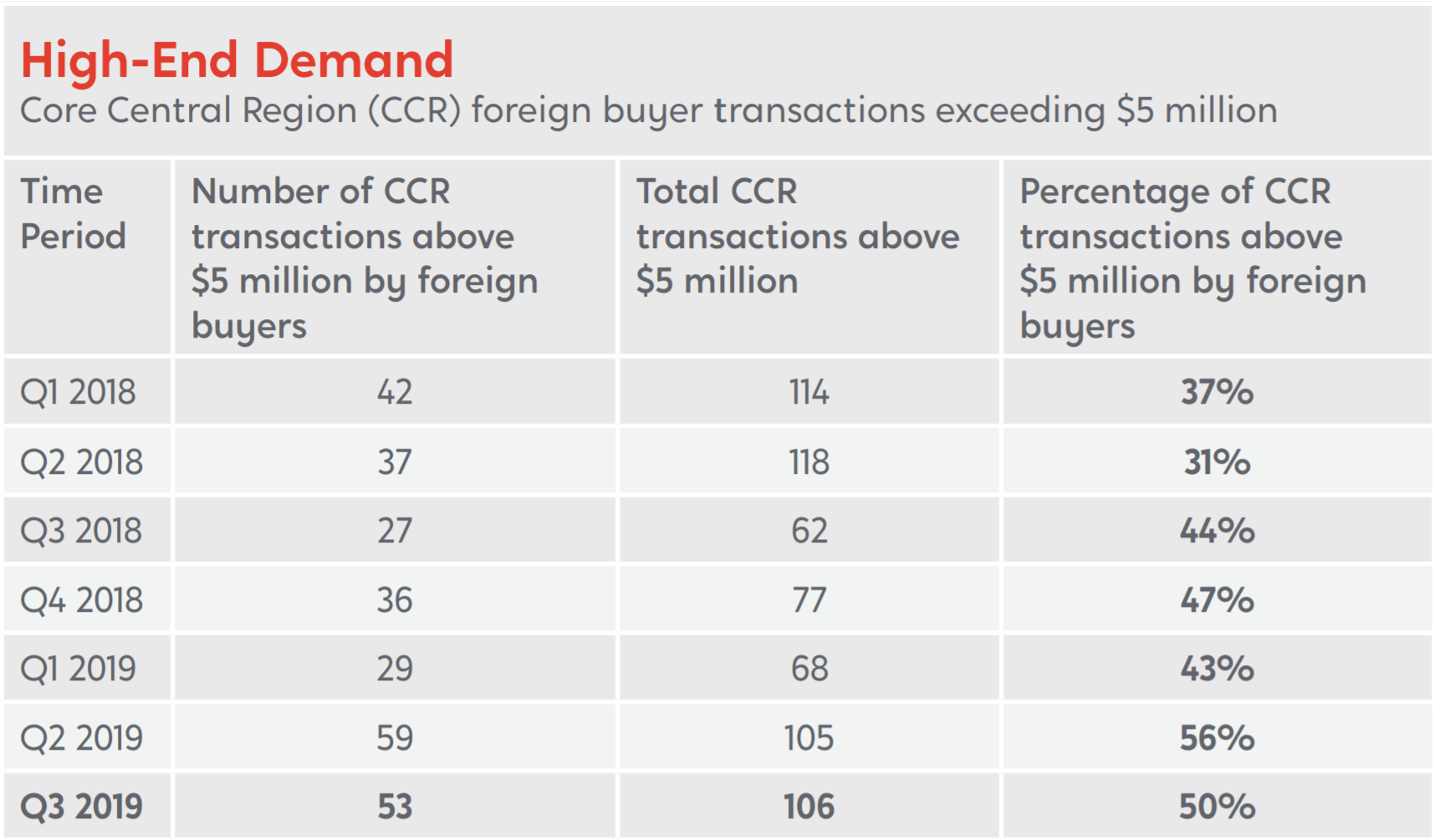 An appetite for luxury

In July, British inventor and billionaire James Dyson bought the 21,108 sq ft, three-floor super penthouse at Singapore’s Wallich Residences for $73.8m, followed by the hilltop Good Class Bungalow (GCB) with views of the Botanic Gardens for $41m just a fortnight later. But he’s not the only one, as these 4 luxe condos have recently attracted uber-rich foreigners to splash out the cash:

In July this year, a whopping 6,555 square feet (sq ft), five-bedroom duplex penthouse unit at 3 Orchard By-The-Park, was snagged by a Chinese buyer at $31.5 million ($4,805 psf), making it the 7th most expensive luxury condo ever sold in Singapore.

Then, in September, another Chinese national one-upped his compatriot by buying the project’s last available penthouse for a cool $32 million, albeit at a slightly lower psf price given the unit’s 6,900 sq ft area. (Who needs that much space anyway?)

Befitting of its ultra-prime location on Orchard Boulevard, this freehold, 77-unit condo pulls out all the stops to impress; interiors are crafted by Italian architect and furniture designer, Antonio Citterio, renowned his work for Bulgari Hotels & Resorts. The concept? To create a villa in the sky, with extravagant details such as handcrafted timber boiserie panelling in the kitchen.

Feeling curious? Take a look at the condos going for $10 million and above on PropertyGuru

In September 2019, a Vanuatu citizen, Xie Zhijing bought a penthouse here at a cool price of $32 million. Spanning the 34th–36th floors of the building, the unit measures 7,718 sq ft, inclusive of 624 sq ft of strata void area. There’s also private rooftop pool, a private lift, two balconies, an oversized dining room, four ensuite, double-height ceilings and unobstructed views of Orchard and CBD. It’s more like a landed property in the sky than a penthouse, if you ask us!

Located opposite ION Orchard, TwentyOne Angullia Park is a skip away from branded shops and a constant supply of caviar at nearby Michelin-starred restaurants.

Did you know: Fugitive Jho Low, a central figure in the 1MDB scandal, reportedly bought two apartments in this posh condo in 2015. His assets have since been frozen.

Fancy a home entirely furnished by Hermès? In September 2019, Cypriot citizen Wang Dehai paid $23 million to secure a unit at The Marq on Paterson Hill that’s not even near the penthouse—a 6,232 sq ft five-bedroom apartment on the 10th floor of the 24-storey Signature Tower.

But there’s another, far pricier unit still on the market: a 17,500 sq ft super penthouse on the top three floors in the Signature Tower of The Marq. An indicative price of $128 million makes this the most expensive condo unit in town; the owner will get a dedicated lift, a private lift lobby in the carpark, four designated parking lots, a roof terrace as well as the most impressive private pool imaginable.

Curated by Yves Taralon, Creative Director of La Table Hermès, elements of the renowned luxury brand extend to all corners of this super penthouse unit, including furniture, furnishing fabrics, carpets, tableware, and made-to-order leather upholstery. Each design detail oozes the Hermès vision of art de vivre, making no apologies for unrestrained opulence as this, after all, is first Hermès-designed apartment in the world.

That’s not all: Final touches include the dining room studded with framed Hermès silk scarves and a crystal chandelier by Saint-Louis Cristalleries (Hermès’ glass-making company).

The Marq on Paterson Hill appears to be a darling of ultra-wealthy foreign buyers. A high floor unit here were sold earlier to a Hong Kong-based European/American couple, at S$25 million (S$4,011 psf) and S$25.5 million (S$4,092 psf) respectively.

Notably, this property boasts a lavish 5,662 sq ft, five-bedroom unit on the 15th floor that was originally two separate three-bedroom units. Property and hospitality group KOP combined the units, which proved a savvy move as it was snapped up by a Chinese citizen for S$20 million (S$3,532 psf) in September 2019.

The Ritz-Carlton Residences Singapore spares no effort at luxury, with two of the units designed by Edmund Ng Architects. The main door, for instance, is made entirely of American oak and underwent six different processes and treatments including sanding and bleaching in the US, Singapore and China.

Each of the five en suite bedrooms boast intricate white oak timber flooring with herringbone detail, and a dehumidified walk-in closet by B&B Italia. Additionally, the master bathroom stands out for its opulent $15,000 Ann Sacks-Selvaggio feature wall, along with Italian Palissandro Classico marble flooring and walls.

Also unique are the lifts at The Ritz Carlton Residences, supposedly the most expensive in town, crafted from real ostrich skin, with clover-shaped handles.

Where property buyers should look

While condos in prime neighbourhoods may be getting pricier given healthy foreign buyer demand, buyers can still discover bargains and value-offerings on PropertyGuru, with a handful of prime district (D9, 10 11) condominiums priced at or below $1 million!

RELATED ARTICLE: This luxury D9 condo has only ONE unit type

Additionally, buyers could also look at city-fringe properties with an upmarket proposition, such as condos in District 7, District 3 and District 15, which could offer better value and rental yield for investors, as well as potential upside. As we like to say, there is a slice of the property pie for everyone in Singapore!