Estimating the size of the rental market

To answer the question, we firstly need to know how important tenants are to this market overall.  This means finding out how much stock is rented.

The Urban Redevelopment Authority (URA) releases information on the stock of private housing including how much is vacant and occupied. While it also publishes data on the number of new leases signed in private housing, this does not reveal how much is rented at a point in time.

There is also information published about Singapore’s Resident households, so we know how many Singaporeans own or rent their homes and whether they occupy private or public housing.

You might think that this gives us the size of the rental market, but unfortunately Resident households only cover the households of Singapore Citizens and Permanent Residents (PRs) and don’t include “foreigner” households who are on Employment Passes and S-passes, many of whom are expatriates. Figure 1 shows my estimates of housing tenure across occupied non-landed private homes in 2019 based on available stock and household information, together with some assumptions.* I also assume foreigners all rent, though a small number would be owner-occupiers.

Foreigners therefore, make up about 65% of all rented properties (24% foreigner households divided by 37%)* so it’s fair to say that they are very important to the rental market.

I can make the same estimates all the way back to the year 2000 and while they are not precise as ‘household’ to ‘dwelling ratios’ could change over time due to income, HDB supply, and property and business cycles, Figure 2 shows the overall trend for the last 19 years (2000-2019). 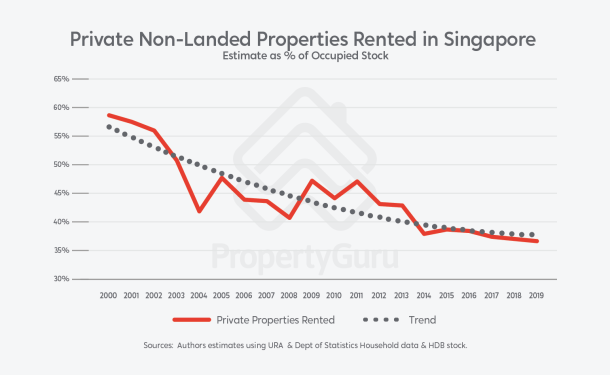 Based on the trend, rented stock has fallen from between 55% and 60% in the year 2000 to 37% in 2019. That’s a big fall in 19 years. The percentage fluctuates year to year as property and business conditions have changed and due to sampling errors in the household surveys on which my estimates are based. Even so, the trend is clear.

Resident owner-occupiers are now the largest segment occupying about 63% of stock, up from a little over 40% in 2000. The number of properties occupied by this group (Figure 3) more than doubled from around 46,000 in year 2000 to 97,000 by 2010.  In the nine years to 2019 the number has accelerated to reach about 176,000, assuming that all foreigners are renters.*  If some foreigners also owned and lived in their home the number would, of course, be higher. 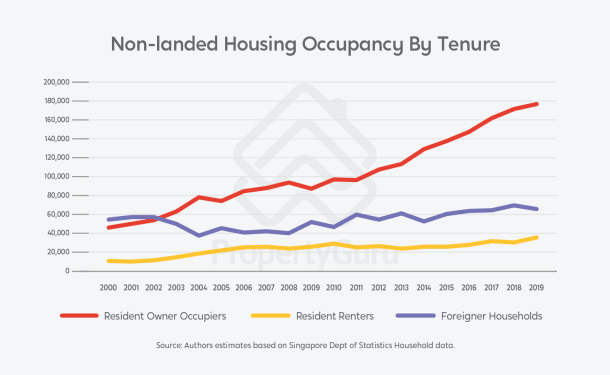 While the importance of foreigners as primary tenants in the non-landed market is significant, it seems to have diminished. One reason for the shift was a sharp rise in PR population from about 287,500 in 2000 to 533,000 by 2009.

As PRs are included in Singapore’s resident population this would have contributed to the rise in resident-renter and owner-occupier households and the fall in foreigner households simply due to changes in residency status.*

But the foreign worker population has risen. What’s happening?

My figures do not cover landed-housing or HDB and relate primarily to rentals of whole properties and therefore don’t reveal foreigners who might be renting rooms in the homes of resident owner-occupiers or sub-letting from other tenants.

Some 70% of the increase in foreigners since 2010 was amongst S-pass holders who are on lower incomes than those on Employment Passes.  This group has less capacity to rent homes in private market and if they are living in Singapore without family, may not want to.

Hence, the demand has been met through room-only rentals in both private and HDB properties and rentals of privately owned HDB flats.  Unfortunately, there is little information on the size and growth of room rentals, but we know that the number of sold HDB flats that are rented has more than doubled from  27,260 at March 2010 to 57,750 in March 2019.

To conclude, foreigners are very important to Singapore’s private housing market, though the high-income expatriate segment appears to have become less important.

With more growth in recent years amongst expatriates on lower-incomes, I suspect much of the growth has been in housing solutions that meet their budgets.  The emergence of residential co-living could be partly a result of these changes.

*For ease of reading, detail on methods and assumptions are not fully documented here.  If readers are interested to know more please contact the author at mediaenquiry@propertyguru.com.sg.