Many parts of Singapore have things they’re well-known for. Changi has Changi Airport, while Bishan and Kallang have the adorable otters. Areas such as Jurong, on the other hand, seem to be known for their poor connectivity to the city centre.

That’s about to change.

What is the JRL?

The Jurong Region Line, otherwise known as JRL, will connect 24 MRT stations in western Singapore. The extreme ends of the JRL will be Peng Kang Hill, Jurong Pier, Choa Chu Kang, and Pandan reservoir. This new MRT line is planned to be completed in 2028.

Who benefits from this?

Residents in Choa Chu Kang, Boon Lay, and Tengah will likely benefit the most from the JRL, given they are the main housing estates that the JRL will serve. Slated to be Singapore’s next full-fledged housing estate, Tengah has been attracting much attention from home buyers and investors. Once the JRL is completed, Tengah’s value is likely to see quite a jump.

You can find out more here about BTOs that were launched in Tengah late last year.

There’s one station in the JRL, however, that stands out.

Right beneath Jurong East is a station called Jurong Town Hall. What’s different about this station is that it’s intended to take you to Malaysia. If the Singapore-Kuala Lumpur High-Speed Rail eventually happens, it will connect directly to the JRL via Jurong Town Hall. Property prices in the area would likely see a subsequent surge.

Those staying in the west will also see improved connectivity to the International Business Park. If you’re a landlord, the Jurong Region Line is like striking the lottery, due to the increased rentability of nearby properties.

The JRL connects several schools and churches to the network. As a bonus, Choa Chu Kang and Boon Lay will be linked directly to NTU. Future students will no longer have to wait for NTU’s crowded shuttle buses to ferry them around the school. Foreign students may choose to rent places near the JRL stations if they don’t want to stay in the NTU dormitories. 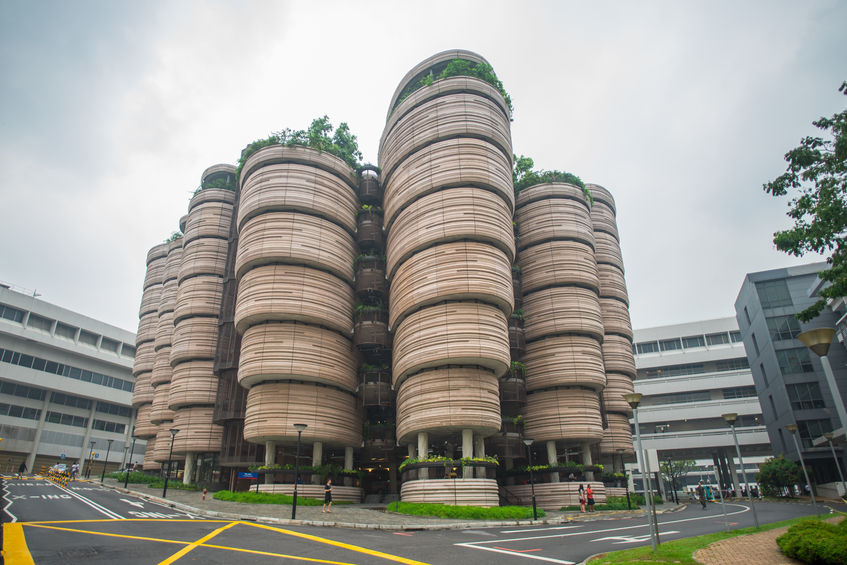 The Hive at NTU

With the new JRL, many developments in Choa Chu Kang such as The Rainforest and the upcoming Sol Acres may see an increase in value over the coming years. The same could be said of developments in Boon Lay such as Lakefront Residences.

How does Tengah fit into the Jurong Region Line?

At present, Tengah is still mostly made up of forests. However, when Tengah is developed – it will consist of four stations: Tengah, Hong Kah, Tengah Plantation, and Tengah Park.

Tengah is set to be the size of Bishan, justifying the need for four stations. However, another reason is that there are plans to develop the town into a car-lite housing estate. Roads and cars will run underground as they approach the town centre, freeing up space for bicycles on the surface level. The government has also planned for most major facilities to be located at the heart of Tengah, otherwise known as the Market Place.

Ultimately, the goal is to provide so many activities and amenities at the Market Place that residents don’t need to venture past Tengah to fulfill their daily needs. The JRL is just another step in that plan.

Why does the JRL train track look so complicated?

The Jurong Region Line splits off into two branches on either end, with the central line going through Tengah. Traditionally, tracks that are built this way will require passengers to change trains to get to their destination, such as the East-West Line’s Changi Airport station.

The LTA has employed a rather interesting strategy. Instead of creating a shuttle service for the branches, they’ve elected to create a ‘loop’. A train from Choa Chu Kang will go directly to Jurong Pier, then turn around and go to Peng Kang Hill, then back to Choa Chu Kang. The trains will only run in one direction. This allows for the maximum number of trains possible on the track. If you wish to speed up your journey from Choa Chu Kang to Peng Kang Hill, you can alight at Bahar Junction to board the train going towards that direction. 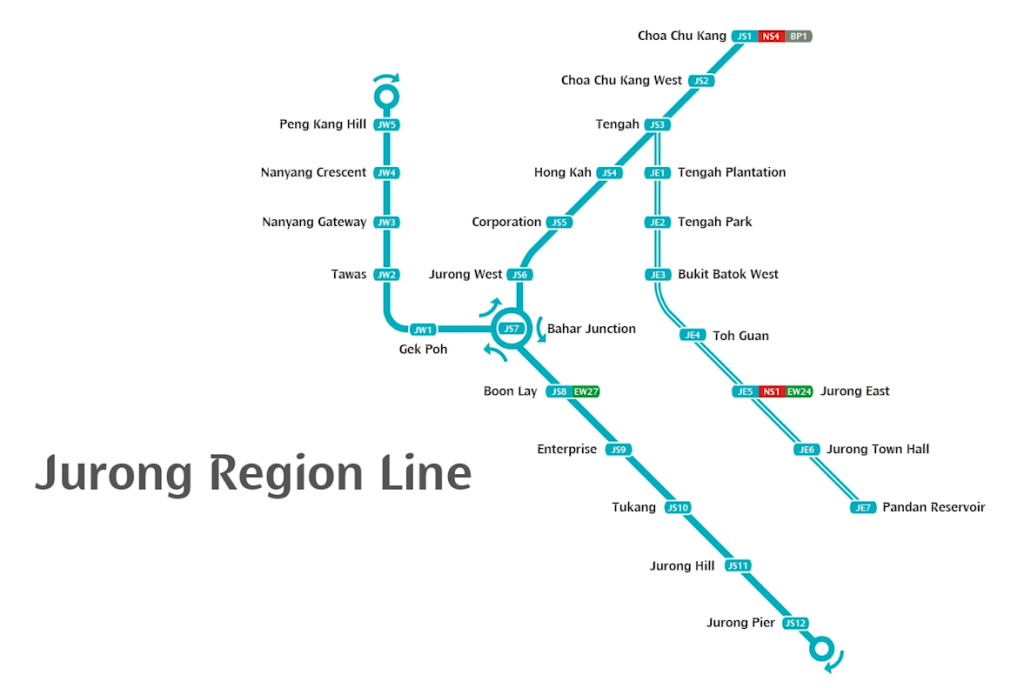 Screenshot from LTA’s JRL publicity video. The trains will only travel in a clockwise direction.

Another interesting thing is that the Jurong Region Line will use smaller carriages at approximately two-thirds the size of our current MRT cars. Since the JRL will weave through many buildings, it has to have smaller carriages in order to be able to make tighter turns.

Apart from the upcoming BTOs in Tengah, there are many properties in the JRL’s vicinity that you can look out for. Le Quest Condominium recently saw a huge interest in its projects after the announcement of the JRL. If you’re interested in HDBs instead, you can find out more here about the BTOs launched recently in Jurong West.