Properties in Singapore are not only becoming more expensive, but they are shrinking in size as well. As such, if you’re searching for a larger home (without breaking the bank), one option is to go for larger HDB flats types such as HDB maisonettes, jumbo HDB flats, and 3Gen flats.

But which should you pick? This article will take a look at the biggest HDB flat types available and what sets them apart. Though they have been discontinued since 1995, HDB maisonette (or executive maisonette) flats are still highly sought after by buyers because of their spacious interiors and unique two-storey design. As such, HDB maisonettes tend to fetch higher prices despite their dwindling lease. In fact, HDB maisonettes start from around $620,000 and it’s not uncommon to see these flats transacting above $1 million in prime locations.

Apart from having two storeys, HDB maisonettes typically range between 1,527 to 1,700 sq ft, with some as large as 2,314 sq ft. This makes them popular among couples or families who require more room.

HDB maisonettes also have three bedrooms and three bathrooms, which is one more than conventional HDB flats. The bedrooms are located on the top floor, offering the occupants some privacy. In addition, maisonette flats also come with balcony space, which is great if you want to air-dry your clothes or have a mini outdoor garden. Jumbo HDB flats are another popular HDB flat type that is no longer in production. They were built by HDB in 1989 by combining unsold 3-room and 4-room flats in estates such as Yishun and Woodlands. As such, these flats are known to be super spacious, ranging from approx. 1,442 sq ft to over 2,000 sq ft.

In terms of characteristics, jumbo flats have a large living and kitchen area because of the combined space. The large floor area makes them popular among large, multi-generational families who desire more space. However, it’s not uncommon for owners to convert the space into extra bedrooms.

Though they come at a premium price of $650,000 to $950,000, it’s unlikely that you will find a home that’s as roomy for the same price, especially within the condo or executive condo (EC) market.

But with only about 2,900 jumbo flats remaining in Ang Mo Kio, Bishan, Bedok, Hougang, Jurong East, Pasir Ris, Tampines, Yishun, and Woodlands, you may have difficulties finding one in the resale market. You can however, create your own jumbo flat via HDB’s Conversion Scheme — by combining two adjoining 3-room (or smaller) flats. Read more about the scheme here.

Three-Generation flat, or more commonly known as 3Gen Flat, was introduced by HDB for multi-generational families who want to live together. Since their introduction in 2013, they’ve become extremely popular among larger families. They’re usually launched alongside BTO sales launches in the year, though these are far and few between. As such, 3Gen flats are usually priced around the same as new BTO flats, starting from around $246,000 to $589,000, depending on the area.

In terms of size, they’re 115 sqm (approx. 1,238 sq ft), which is slightly bigger than 5-room flats (110 sq m). However, what sets them apart from 5-room flats is they have four bedrooms and three bathrooms, two of which are attached bathrooms, though the bedrooms may be smaller.

As 3Gen flats are designed for multi-generation families; the bedrooms are located on opposite sides of the shared living area to give the occupants more privacy (think of it like dual-key condos but without a main and sub-unit).

To buy a 3Gen flat, you need to form a multi-generation family with your parents and children as they would be listed as occupiers. This means that all occupiers (including your parents) must not own any property both locally and abroad. Additionally, their income will also be taken as part of the monthly household income (which is up to $21,000).

Lastly, you can only sell your flat to another multi-generation family once the 5-year MOP is up. You also can’t rent the rooms out, even after the MOP.

Read more about the eligibility of 3Gen flats on HDB’s site here. Executive apartments (EAs) were first built in the 1980s for families who want bigger homes. Like most HDB flat types on this list, EAs are no longer in production as they were phased out in 2005.

In terms of design and size, they have three bedrooms and two bathrooms (similar to 5-room flats). However, the EAs come with a larger living area which can be converted into a study room/maid’s room/additional bedroom. They’re also larger than 5-room flats, ranging from 140 sq m to 150 sq m (appox. 1,507 sq ft to 1,615 sq ft). 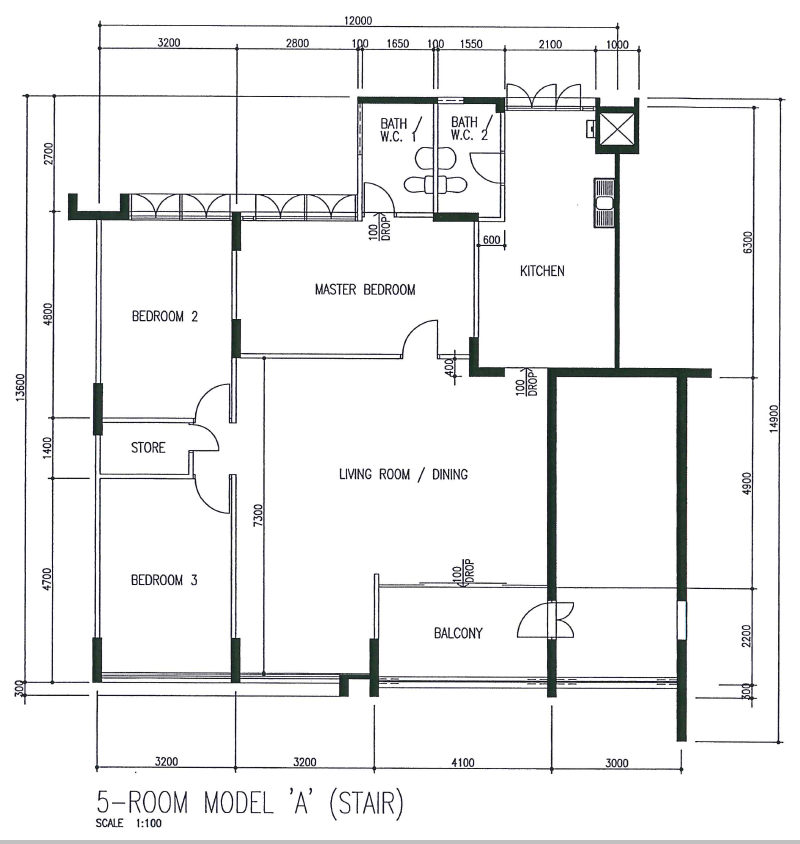 5-room flats are the only new flat type that most can BTO for (you need to apply as a multi-generation family for 3Gen flat). They come with three bedrooms and are one of the two (the other being 4-room flats) most popular flat types during HDB BTO launches. Take the November 2020 BTO launch, for example, 5-room flats across the various launches, including those in Bishan and Bidadari, were heavily oversubscribed.

As jumbo HDB flats have been discontinued, you can only find them in the resale market. They are typically located in areas such as Ang Mo Kio, Bishan, Bedok, Hougang, Jurong East, Pasir Ris and Tampines.

Three-Generation Flat, or 3Gen flat, is a flat type that is designed for multi-generation living. They have four bedrooms and three bathrooms that are located on opposite ends of the shared living area to give privacy.

4. What Is the Executive Apartment?

The executive apartment is an HDB flat type that was built in the 1980s for families who desire bigger space. They have three bedrooms and two bathrooms but are larger than 5-room flats, ranging from 140 sq m to 150 sq m as they have an additional space that can be used as a study room or living room.

This article was written by Victor Kang, Digital Content Specialist at PropertyGuru. When he’s not busy churning out engaging property content* or newsletter copies, he’s busy being a lover of all geeky things. Say hi at: victorkang@propertyguru.com.sg