It’s the Singapore General Elections (GE) season again, and if this isn’t your first time polling, you might remember that the past few elections have been quite exciting.

What happened in the Singapore GE 2015

In the previous election in 2015, Workers’ Party (WP), led by party chief Low Thia Khiang, won Aljunied GRC by a narrow margin of 1.9% for the second year running. Of course, the People’s Action Party (PAP) still won the general election, and although many expected tougher competition for the incumbent after 2011’s poor performance, PAP actually scored 69.9% of the votes, making it their biggest win since 2001.

What ‘poor performance’ you say? Well, the previous, previous 2011 Singapore GE was an especially eventful one, as it marked the first time the PAP lost a group representation constituency (GRC). Although the government did not change hands that year, PAP received only 60.1% of the popular vote, its lowest since it was voted into power in 1959.

Fast forward to a few years later and here we are today, getting ready to go to the polls on 10 July 2020!

Housing was a hot-button issue in past general elections

Although the current Singapore GE 2020 seems to be zooming in on rising unemployment and the pandemic recession, housing affordability in Singapore was a hot-button issue during the past two elections in 2011 and 2015.

Here’s a look at the housing price indices in Singapore.

Singapore housing policies and changes in the past decade

So what’s been done since? Here’s an overview of some of the more noteworthy policies and housing-related changes in the past decade.

If you look on Google Maps, Tengah is pretty much a barren land. If you look at URA’s Master Plan, however, you’d notice a ton of dotted-line roads and developments that are already in the works. In fact, the first batch of BTO flats were completed in 2018.

The new Tengah estate is about 700ha, which is about the size of Bishan. It is expected to house about 42,000 new homes across five residential districts, and will be Singapore’s first smart and sustainable town, utilising green features and smart technologies.

Although early movers to this area struggle with relative inaccessibility (the nearest MRT is currently Bukit Batok MRT, which is about 5km away), the upcoming Tengah MRT station on the Jurong Region Line (JRL) is expected to be completed by 2026.

On 5 July 2018, the government announced a slew of property cooling measures to “cool the property market and keep price increases in line with economic fundamentals”. By increasing the Additional Buyer’s Stamp Duty (ABSD) and tightening the Loan-to-Value (LTV) limits, they basically 1) made it more expensive to own multiple properties and 2) reduced the maximum amount home buyers can borrow to finance their property purchases. 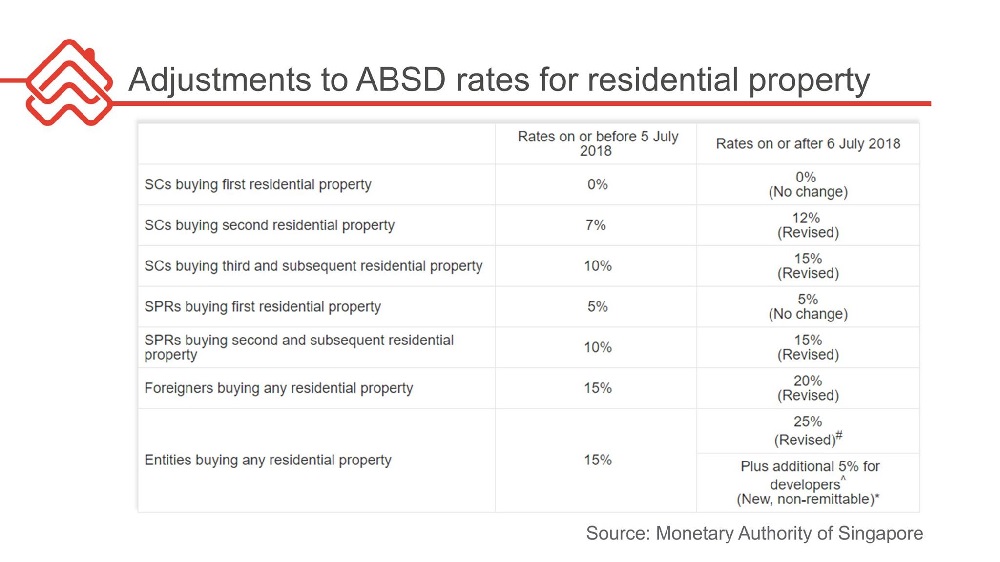 If you wouldn’t dream of buying a second property, then the ABSD hike doesn’t affect you. This is a tax for owning more than one property. 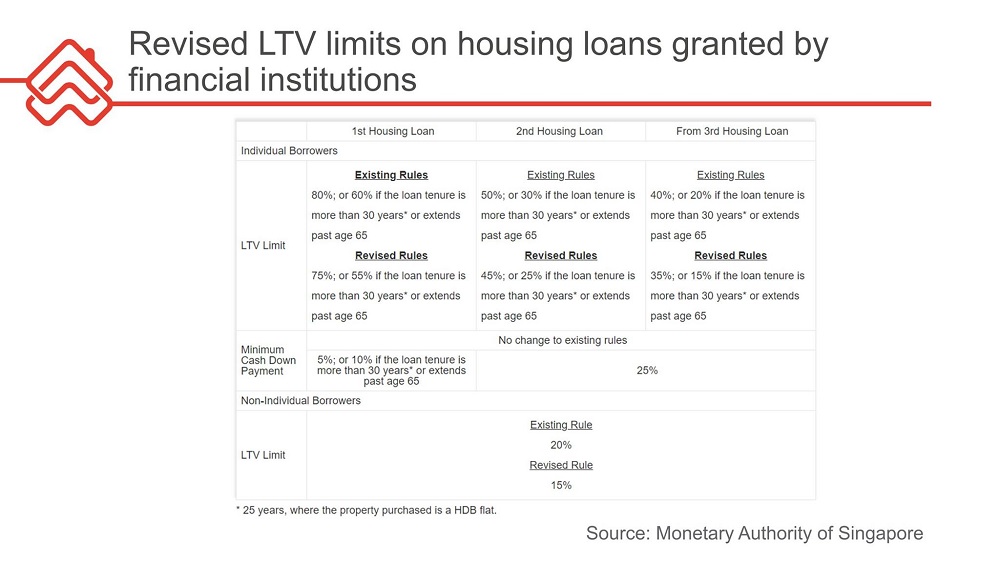 This one, however, affects first-time homeowners more directly. Because the LTV was revised, the maximum loan amount was reduced, meaning home buyers have to fork out more money upfront than before.

The announcement of cooling measures were quite timely, coming just days after private property prices were reported to have hit a 4-year high. Private housing prices were declining gradually for close to four years before beginning to rise in the third quarter of 2017.

There’s been quite a few changes to HDB schemes in the recent years.

Generally, the EHG seems like an improvement. The previous AHG and SHG schemes were more restrictive. SHG did not apply to resale flats, and was limited to purchases of 4-room flats and smaller in non-mature estates. The income ceilings were also lower at $5,000 for AHG and $8,500 for SHG respectively.

You can read more about the EHG in this article: HDB’s New Enhanced CPF Housing Grant (EHG) and Higher Income Ceilings: What You Need to Know

Even more recently in Mar 2020, HDB also tweaked the way they offer balance flats for sale.

HDB has four BTO launches per year, and inevitably, there are unsold flats from each launch. These are the balance flats which are then sold during the Sale of Balance Flats (SBF) exercise. The trouble with SBF is that it’s only offered twice a year.

So what do you do if you need a home asap? Previously, you would get them through the Re-offer of Balance Flats (ROF), but that’s since been replaced by the new Open Booking system.

The Open Booking system lets home buyers “shop” for new HDB balance flats throughout the year. Once your application is successful, you can get a flat selection appointment as early as the next working day.

The government did a ‘trial run’ of sorts in Jun 2019 before fully rolling out the open booking system in Mar 2020.

Being a single unwed parent is tough in many ways, including affording housing.

Although this is a big step in helping single parents in Singapore, the HDB policy still does not consider single-parent families as an eligible “family nucleus”, which is a requirement for CPF housing grants under the Families Grant scheme.

The Silver Housing Bonus and Lease Buyback Scheme are more for the elderly households in Singapore.

The Silver Housing Bonus was first introduced in 2013 for elderly households that right-sized their homes to 3-room or smaller HDB flats. Those eligible will receive up to $30,000 cash bonus when they top-up $60,000 into their CPF Retirement Account (RA), and join CPF LIFE.

There are quite a few more hoops to jump through though, so if you think you might be eligible, it’s best to check the eligibility criteria on HDB’s website.

Also to help the elderly going into retirement, the Lease Buyback Scheme is for flat owners 65 years old and above to sell part of their remaining leases to HDB. They must have at least 20 years of lease to sell, and must keep a minimum of 15 to 30 years of lease.

For SERS, the government picks and acquires precincts with high redevelopment potential. They compensate the current residents based on the property’s value, and offer other perks like subsidies on their new replacement flat and more. This is the ‘windfall’ most people are referring to when they speak of HDB en bloc sales.

However, the selection for SERS is quite strict, and most of the high-potential areas have already been identified. So if your estate hasn’t been picked for SERS, tough luck.

That is where VERS comes in. VERS is a new scheme that will be offered to precincts that hit 70 years old, allowing HDB home owners a chance to give up their ageing flats to the government (by voting).

Not much has been released, but it’s been explicitly stated that the VERS compensation package and terms will be less generous than SERS’.

Housing policies in the Singapore GE 2020

This is not an exhaustive list, but it at least lists some of the more noteworthy Singapore housing policy changes over the past few years. Although housing is not a major theme in this year’s election, several opposition parties have brought up the theme in their election manifestos.

For example, one of Red Dot United’s policies is to make SERS compulsory for all HDB flats. They also want to price new flats at a multiples of median income and location factor, allow singles to buy larger BTOs, and lower the minimum age of the Single Singapore Citizen and Joint Singles Scheme to 30 years old.

The Progress Singapore Party (PSP) is likewise calling for an en bloc for all old HDBs, and wants to peg the prices of new flats to income levels.

But perhaps the party with the most policies on housing is Singapore Democratic Party (SDP). They propose the introduction of public Non-Open Market (NOM) flats that do not include land costs in their price. They are also pushing for a Young Families Priority Scheme (YFPS) that prioritises first-timer families with children.

Additionally, SDP is calling for more to be done for single-parent families with children and single buyers, and is proposing to further enhance the Lease Buyback Scheme, and increase the range of lower-income Singaporeans eligible for housing rentals.

Whichever way your vote sways, it’s important to note the recent developments in the recent years, especially following the past elections.

And after dropping your precious vote in the ballot box on 10 July 2020, don’t get lazy! Continue keeping up with the latest news on housing in Singapore so you can make sure your chosen leaders make good on their word.

Happy polling, and don’t forget to mask up!

Shopping for a new home? Head to PropertyGuru to browse the top properties for sale in Singapore.