As Singapore is land-scarce country, most of our buildings are high-rises. In fact, there are over 8,600 high-rises, and 80 skyscrapers in the CBD area alone. With all the modern skyscrapers, have you ever wondered which building is the tallest building in Singapore?

The tallest buildings in Singapore now 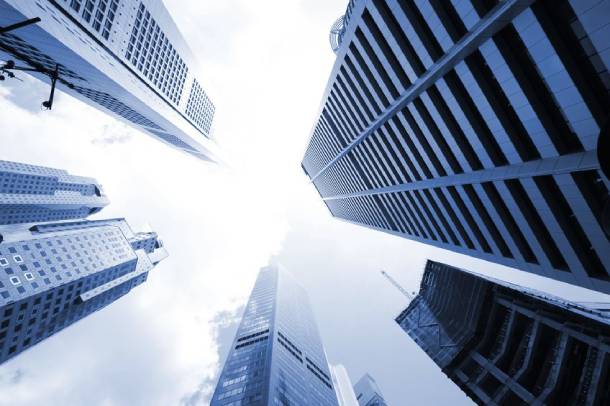 The majority of the tallest buildings in Singapore share the same maximum height of 280m. The reason is because they are built in an area (around Raffles Place and Marina Centre) that intersects with a flight path to Paya Lebar Airbase. The height limit is put in place so that aircraft don’t collide into them. The one exception is Tanjong Pagar Centre, at a height of 290m – is the tallest building in Singapore and is the only building that isn’t bound by height restriction.

Here’s a table comparing the top 6 tallest buildings in Singapore:

Located at 1 Wallich Street, Tanjong Pagar Centre was completed in 2016. The $3.2 billion mixed-use development is more commonly known as Guoco Tower is currently the tallest building in Singapore.

The architects of the building drew inspiration from the Chinese calligraphic characters for “people” and “door” – these elements can be seen at the entryways of the building. At night, these design elements become more obvious with special lighting.

The building has a wide variety of dining and retail options. Some notable ones include Henri Charpentier, Hattendo Cafe, and the Japan Rail Cafe.

UOB Plaza is a complex comprising of twin-tower late-modernist skyscrapers. The taller of the two, Plaza One, was completed in 1992 shared the title of “tallest building” with One Raffles Place and Republic Plaza up until 2016. Plaza Two is actually the older of the two, completed in 1974 and later renovated in 1995 with a facade similar to that of Plaza One.

Plaza One is the headquarters of United Overseas Bank, and other major financial corporations such as UBS. A restaurant named Si Chuan Dou Hua sits at 60th floor, and the basement houses the Masjid Moulana Mohd Ali mosque.

Plaza Two was originally Bonham Building. It was a three-storey building that was demolished in 1965 to begin construction of the current 30-storey tower.

The towers have an octagonal base and consist of rotated cubic volumes. The two buildings are linked by a six-storey podium. The banking hall has full height glass walls that allow the for unobstructed views of the Singapore River. A large skylight provides natural lightning, and a sky lobby on the 37th and 38th floors provide a panoramic view of the city. Two sculptures grace the ground floor – Homage To Newton by Salvador Dali at the entrance, and Fernando Botero’s Fat Bird, nearer to the riverside.

For eating options, there is The Salad Shop at Plaza Two, and if you’re doing some fancy entertaining, head to the restaurant on the 60th floor – Si Chuan Dou Hua is the highest (by location) Chinese restaurant in Singapore.

The upcoming 51-storey CapitaSpring is slated for completion in the first half of 2021, and is set to be among the tallest and greenest buildings in Raffles Place.

Located at 88 Market Street, the building will feature serviced residences, office spaces, ancillary retail space, as well as a food centre located on the second and third levels of the development.

To complement the government’s strategy for a car-lite Singapore, the development will also feature a cycling path within its perimeter, 165 bicycle parking lots and end-of-trip facilities.

Formerly known as OUB Centre, this 278 m-tall building is located at 1 Raffles Place in the city centre. It tied for the tallest building in Singapore together with UOB Plaza and Republic Plaza until the completion of Tanjong Pagar Centre in 2016. When it was completed in 1986, it was also the tallest building in the world outside of North America.

It consists of two triangular structures with a space between them, and a steel framework allows office spaces to be unobstructed by columns. It is linked above and below ground to Raffles Place MRT, with a six-storey shopping mall that has 100,000 sq ft of retail space. The tower is clad with a chemically treated aluminium alloy that changes colour depending on the light reflected off it. Its facade is perforated by geometric designs, and its entrance has an eight-storey cutaway accented by dramatic lighting effects.

The shopping mall has a Marks & Spencer, and several healthy dining options such as Healthy Soba IKI, Wheat, and GreenDot for vegetarians. Stop by Jewel Coffee for an after-meal drink – this coffee house has its own micro roastery, and is committed to making speciality coffee approachable and accessible.

One of the other buildings tied for the title of “Singapore’s tallest buildings” until Tanjong Pagar Centre, Republic Plaza was completed in 1995. It is located at 9 Raffles Place and currently houses the Mitsubishi UFJ Financial Group and its various subsidiaries across 15 floors. The Honorary Consulate of Mali and Honorary Consulate of Saint Vincent and the Grenadines are on the 32nd and 58th floors, respectively.

Republic Plaza’s main entrance is located at D’Almeida Street, and the building was designed to maximise space. The design of the tower is meant to reflect a subtle Oriental influence, and is based on a simple square with chamfered corners. It tapers as it rises, forming triangular elements. This tapering reduces buffeting from strong winds, and improves wind loading. The tower is turned 45 degrees from the axis of the ground floor level to maintain sea views at the upper floors, and it has 15 double-decker vertical lifts. Its main lobby is four storeys high and finished in polished granite and ceramics.

Although Republic Plaza is primarily dedicated to office spaces, you can still find some good eats such as Isshin Japanese Restaurant, The Herbal Bar and Teppei Syokudo. For those with a sweet tooth, head to Pâtisserie Glacé and try out their Rin Rin Cheese Tarts – you won’t be disappointed.

Standing at 254m, this skyscraper was completed in 2000, and is located at 168 Robinson Road. It stands as Singapore’s fourth tallest skyscraper. The building stands out at night due to colour-changing lighting on certain portions of the structure. It was originally planned to be the headquarters of POSB, but ownership ended up being transferred to CapitaLand. The building then became the company’s flagship building, and was renamed after it.

Capital Tower is linked to Tanjong Pagar MRT station and surrounding buildings via a network of underground pedestrian walkways, so wet weather isn’t a problem. The major tenants of the building, besides CapitaLand, are GIC Private Limited and JP Morgan Chase Bank.

The development won the Green Mark Platinum Award for several “green features”. The building optimises energy efficiency, making use of an “energy recovery wheel system in its air-conditioning system which allows for the recovery of cool air, to maintain the chillers’ efficiency”. It also has motion detectors installed at its lift lobby and toilets which turn off lights when they aren’t in use. Double glazed windows reduce the amount of heat entering the building, which in turn reduces the energy used to cool it down. The building also lowers water usage by making use of condensation from its air handling unit to serve as top-up water for its cooling towers.

These office towers are not the only eye-catching high-rises in Singapore. Some of our residential buildings are fairly impressive, too. Check out Pinnacle@Duxton, a unique HDB project located in Tanjong Pagar.