The Civic and Cultural District is one where old and new are juxtaposed, and to which locals and foreigners alike flock for a wealth of education and enjoyment. With its historical landmarks and modern attractions, all along the Singapore river, its appeal appears timeless.

Known as the district “where modern Singapore began”, the Civic and Cultural District was formed in 1822 by Singapore’s founder, Sir Stamford Raffles. It runs along the banks of the Singapore River, adjacent to the river mouth.

Since the inception of this early master plan by Raffles (quite possibly the very first master plan the country ever saw), the district has seen a drastic transformation, yet still retains the most iconic elements of its history and heritage.

Landmarks such as the former City Hall, Empress Place and Supreme Court buildings, the Old Parliament House, the Padang, and the Victoria Theatre and Concert Hall still stand today. The district’s last master plan was drawn up and put into motion in the 1980s; since then, modern landmarks such as the ArtScience Museum, Esplanade — Theatres on the Bay and Merlion Park have sprung up on its landscape.

From far and near

Needless to say, the Civic and Cultural District brings in many tourists, with its mix of historical significance and modern landmarks. As Eugene Lim, Key Executive Officer at ERA Realty Network says, “The Civic and Cultural District is a major draw for tourists, with its many attractions. The newly opened National Gallery, the Esplanade, and the National Museum are just some examples. The area is also historically rich, being known as the birthplace of modern Singapore and (having been) master-planned by Sir Stamford Raffles.”

However, it is quite unlike other tourist attractions in Singapore, or — as some bluntly call them — “tourist traps”, such as Chinatown and Sentosa.

This is mainly because the Civic and Cultural District focuses less on pricey gimmicks and souvenir shops whose main purpose is to get tourists to spend money, and more on entertainment, culture, and Singapore’s heritage. That is not to say places like Chinatown and Sentosa lack these aforementioned elements, but the Civic and Cultural District’s greater number and variety of historical sites and monuments make it a part of Singapore both tourists and locals alike love to visit.

Indeed, it is not uncommon to see tour groups, teachers and students on school excursions, families, groups of friends, or couples in these parts, taking in the sights and learning more about Singapore’s history. So what are the must-see attractions here? 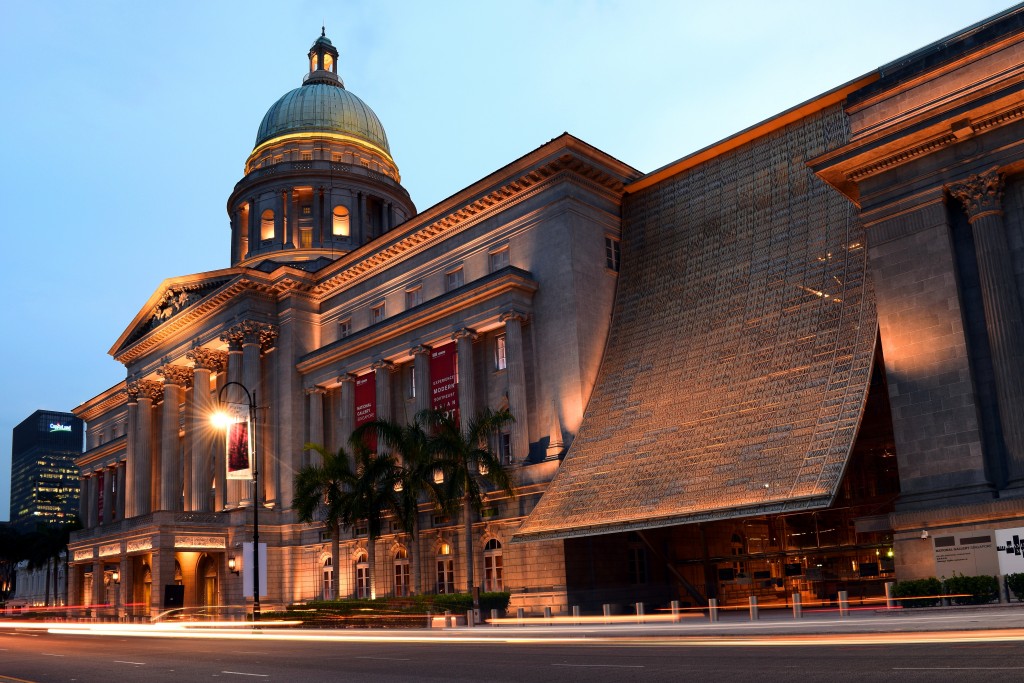 At 690,000 sq ft, The National Gallery Singapore is the country’s largest museum and visual arts venue.

A tour of the Civic and Cultural District and it will become obvious why it is often informally referred to as the museum district. The National Museum of Singapore, a neoclassical building located on Stamford Road, showcases local treasures. Nearby, on Bras Basah Road, the Singapore Art Museum holds regular exhibitions from its permanent collection of 4,000 Southeast Asian paintings. The Asian Civilisations Museum, situated in what once was the Empress Place building, displays stunning collections of artefacts and art works from China, South Asia and Southeast Asia.

For a taste of Straits Chinese history, head to the Peranakan Museum on Armenian Street, where you can find rare Peranakan artefacts. If you have an interest in stamp-collecting, go further up Armenian Street to the Singapore Philatelic Museum, which is downhill from Fort Canning Park.

In 2011, the 50,000 sq ft ArtScience Museum at Marina Bay Sands was opened. Designed by accomplished architect Moshe Safdie, the museum’s exterior stands out for its resemblance to a lotus flower. It has three permanent galleries, with 21 gallery spaces in total.

There is plenty to watch in the district, what with the Arts House (the Old Parliament House), Victoria Theatre and Concert Hall, and Esplanade — Theatres on the Bay all located here.

The Arts House, as its name suggests, showcases a wide range of different art forms, from the literary and visual to the dramatic and musical. It also holds programmes and workshops that encompass the aforementioned arts for children, youth and adults.

The Victoria Theatre and Concert Hall, which first saw the light of day in 1862, is one of Singapore’s oldest performing arts centres. It has no doubt undergone extensive refurbishment over the years, and still hosts musical and theatrical productions to this day. Known for its superior acoustics, the concert hall was the Singapore Symphony Orchestra’s (SSO) main performance venue before the Esplanade was completed in 2002.

Since its completion in 2002, Esplanade — Theatres on the Bay has hosted shows from all over the world, from ballets and stage musicals to plays and orchestral performances. It is perhaps best known for being the home of the Esplanade Concert Hall being the main performing venue of the SSO, and for hosting the annual 10-day long Mosaic Music Festival, which ran from 2005 to 2014.

Apart from the museums, concert halls and theatres, the district has no shortage of historical landmarks and monuments.

Not far from the National Gallery Singapore is St Andrew’s Cathedral, a 180-year-old Anglican church known for being one of the country’s grandest places of worship. Barely a 15-minute walk away, on Beach Road, is the iconic Raffles Hotel, a colonial-style luxury hotel established nearly 130 years ago.

Of course, there is also Fort Canning Park, the former residence of none other than Singapore’s founder, Sir Stamford Raffles. It played a role in the Second World War as a vantage point from which enemy movements at sea could be observed, and is today a historical park that has also hosted many an outdoor performance.

The Civic and Cultural District is not known for its residential developments, but those willing to consider a less conventional location in which to live might do well to give this area a chance.

For a start, non-landed private residential properties in District 1 – which covers the Civic District – showed an appreciation of roughly 35% in the past 10 years (as shown in the chart below). This indicates strong investor interest in the area in recent years. 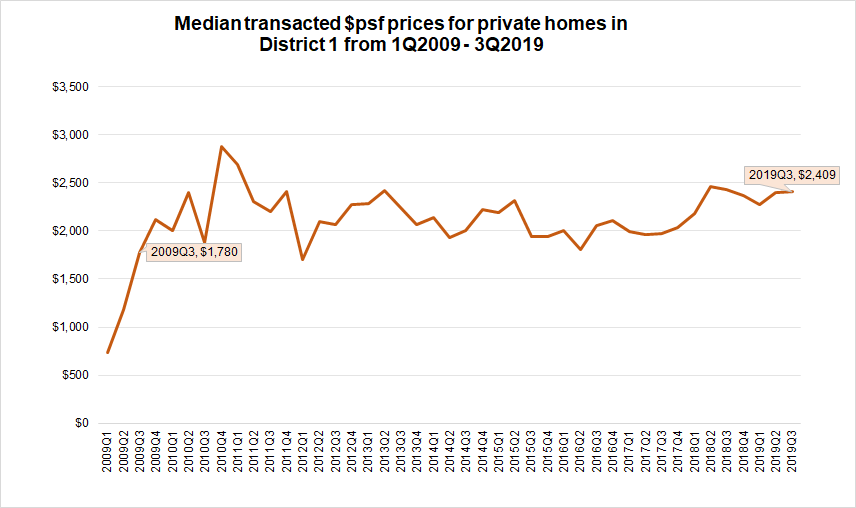 While the number of residential developments within District 1 tends to be fairly limited, they offer a markedly different lifestyle compared to traditional prime districts 9, 10 and 11.

In addition, with the government’s plans for the district, it could become a more conducive place in which to reside.

For starters, the government has highlighted several initiatives for the area, having introduced car-free Sundays and the restoration of several historical buildings. Also, the government has pledged $3 million to elevate the area’s appeal, with more cultural and lifestyle offerings.

These upcoming changes to the Civic and Cultural District certainly make it one to watch, and could open up a world of possibilities to property buyers and investors. 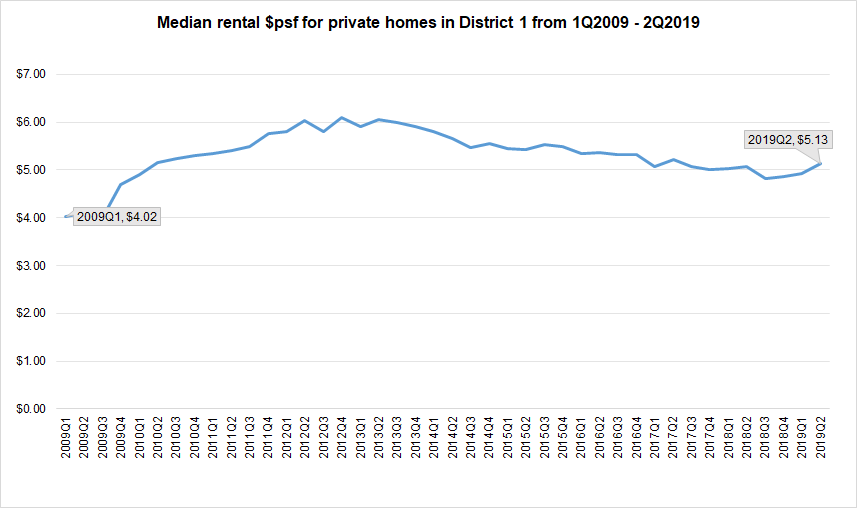 Given the area’s proximity to the CBD, rentals are most likely buoyed by a steady pool of expat renters who are working in the area.

Indeed, with the government’s plans for the district, it could become a more conducive place in which to reside.

Unsurprisingly, there is a large variety of dining options in the district. At Esplanade — Theatres by the Bay is the renowned Makansutra Gluttons Bay, founded in 1997 by photojournalist KF Seetoh, features a smorgasbord of local cuisine.

If the hot, humid weather drives you indoors with a growling stomach, you might want to check out the Esplanade Mall’s offerings. It has a wealth of cafés and restaurants, including Barossa (Australian fusion fare), the famous No Signboard Seafood, rooftop bar Orgo, and Mischief American Street Food.

Over at The National Gallery Singapore is the National Gallery Kitchen by Violet Oon, where the celebrity chef and food critic serves up local delights such as rojak, fish head curry and kuay pie tee. The eatery’s high tea menu features interesting items such as otak crostini and pulled beef sambal bao.

It also offers catering services, and you can book its beautifully designed and lavishly furnished private dining room, main dining hall or veranda for parties and gatherings.

The art of the craft

Should you want to explore your creative side, there are several programmes conducted at the various arts venues in the area. At The Arts House, children aged five to six can sign up for the Little Shakespeare at The Arts House workshop, which introduces them to the Bard of Avon and his many works via interactive role-playing.

For those with a crafty streak, The Arts House also hosts workshops conducted by The Thistle Bindery & Co. A fee of $40 allows each participant to attend a three-hour workshop, access to journal paper, a leather cover and other materials to bind one book, and the usage of bookbinding tools during the workshop. Upcoming sessions are on 10 September and 8 October this year.