On 27 March 2019, the Urban Redevelopment Authority (URA) launched a draft of their Master Plan for Singapore. The Master Plan is “a statutory land use plan that guides Singapore’s developments in the medium term over the next 10 to 15 years” – basically, it’s a blueprint that shows how the government plans to make use of Singapore’s land. It details allowable land use in Singapore, and the density of developments. It’s reviewed every 5 years to keep things up to date.

The Master Plan breaks down the land of Singapore into coloured blocks, or zones. Each zone is colour-coded and its purpose can be looked up in the legend provided. Information such as what the zone will most likely be used for and plot ratios can be viewed on the Master Plan. Savvy property buyers make use of this plan in order to make decisions as to what property they may buy.

For example, if a property is surrounded by undeveloped land, the intended purposes of those zones have significant impacts on the property should they be developed. Plot ratios are also important in determining what is most likely to pop up.

The latest version of the Plan can be accessed here.

What’s notable about the updates?

While you can look at the Master Plan and eventually figure out which zones will undergo what kind of development, we’ve summarized the major points that the Plan unveils for your perusal. More living options in the heart of the city

There are several noteworthy points in the plan that will affect how Singaporeans get around, as well as where they will live. One of these is the initiative to build more residential areas/housing in the office-dominated CBD and Marina Bay area. After office hours, the area is pretty quiet, and the government hopes to bring in more hustle and bustle by increasing the live-in population. There is also an incentive scheme being launched to encourage more mixed-use developments as part of plans to make the city centre more vibrant.

Take a look at this article on The Central – an example of living spaces merged seamlessly with both office and retail spots.

Farrer Park, Queensway and Tanglin Halt will also see new homes built, which will give homebuyers more options if they wish to live closer to the city centre. Keppel Club, whose lease will expire in 2021, will be developed for waterfront housing. More waterfront living is in the works for a new precinct named Bayshore, which will be car-lite and feature a mix of public and private housing.

The government plans for all buildings in the downtown area to be within a 10-minute walk of an MRT station. For those who enjoy cycling, there are plans to add at least 5km of cycling paths to the existing 22km network. In addition, Robinson Road could be turned into a priority corridor for public transport – meaning more space for buses, cycling paths, and pedestrian walkways. 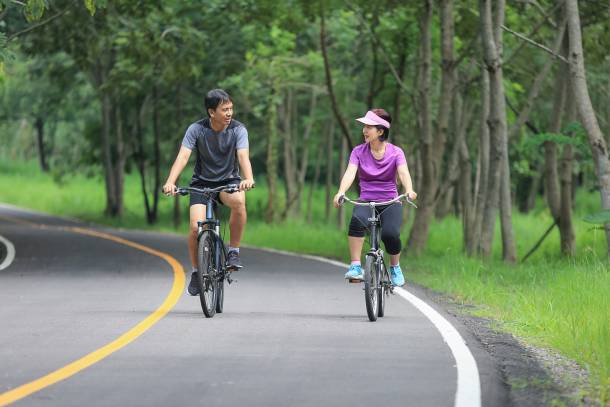 Singapore currently has about 7,800 hectares of green space – these spaces are comprised of nature reserves and areas, parks and their connectors. The URA Master Plan indicates that over the next 10 to 15 years, about 1,000 more hectares of these green spaces will be added.

The goal is to have at least 90 percent of Singaporeans living within walking distance of a park. Singaporeans can also look forward to about 400km of park connectors in that timeframe. These parks will be connected by recreational corridors – the Round Island Route is one such example, and is expected to be fully completed in 2035.

The Rail Corridor, another connector, will be fully connected by 2021, and just recently, the Coast-to-Coast Trail was launched to the public. It is a 36km long trail that stretches from Jurong Lake Gardens in the west, to Coney Island Park in the northeast. It also has 10 checkpoints that pass through 18 parks/nature areas and 11 park connectors.

For communal spaces, the Singapore Racecourse might see a transformation into a venue for family-friendly activities. Within the next 5 to 10 years, development for the 2,000-hectare Greater Southern Waterfront project is expected to commence. This area spans Pasir Panjang to Marina East, and will slowly transform into a significant waterfront node.

Paya Lebar Airbase is also being relocated, which will free up about 800 hectares of land. It is expected that this land parcel will be used for a new town, which might mean more BTO opportunities for citizens.

Pasir Panjang Power District will receive a new lease of life as a lifestyle and heritage destination; the former Bukit Timah Fire Station and Beauty World will also undergo similar transformations and serve as gateways for nature and heritage attractions.

The Former Station Master’s Quarters, which are opposite the Bukit Timah railway station, will be conserved. Both the station master’s quarters and railway station will be refurbished and retrofitted with modern amenities. Other districts that are important to arts and culture like Bras Basah, Bugis and Fort Canning will be expanded and enhancements made to improve the public space.

For Farrer Park, it has its heritage in sports, so familiar landmarks such as the Farrer Park swimming pool and former boxing gym building will be kept to preserve its history.

Read our article on Katong – another iconic district rich in heritage and culture, and learn how it became what it is today.