At long last, the Urban Redevelopment Authority (URA) has finalised the long-awaited Master Plan 2019, following the teaser that was the URA Draft Master Plan earlier this year. Mapping out present and future uses of land in detail, the URA Master Plan reveals a lot about the Singapore government’s plans to develop the country in the next five years (that is, until the next Master Plan emerges).

And, if you don’t already know, details of the URA Master Plan can provide valuable, and actionable information for anyone with a stake in local property, be it owners looking out for an opportunity to upgrade, investors looking out for upside, or prospective buyers deciding on where the location of their dream home. 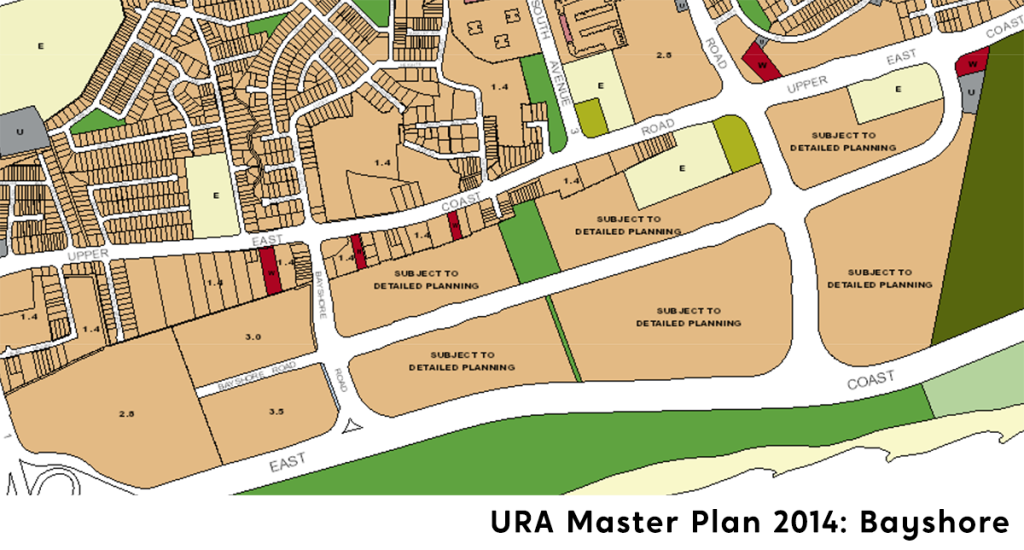 Note: Residential sites are colour-coded as pale orange on the URA Master Plan.

The Background on Bayshore

In 2017, the government revealed it will be developing the 60-hectare Bayshore precinct in the East of Singapore when the URA called for private consultants to submit a blueprint for the yet-to-be-developed area. The brief? To create a “vibrant and sustainable garden neighbourhood” aimed at capitalising on its proximity to East Coast Park. Part of the plan was to build 12,500 housing units, of which 6,000 will be HDB flats.

What’s more, the upcoming Thomson-East Coast Line (TEL) stations of Bayshore and Bedok North will open in 2023, connecting the area to the CBD in under 40 mins. Any significant real estate project in the area is likely to launch only after the opening of the stations.

Can’t wait to live in the area? Start browsing homes for sale in and around Bayshore

What changed in the URA Master Plan 2019 for Bayshore

URA defined the plot ratios of the planned residential sites at Bayshore, which were previously “Subject to Detailed Planning”. A ratio of 3.5 means that we’ll likely see high-rise housing of 25 storeys and above. This means that lucky homeowners may get a chance to snag a coveted apartment with sea views at Bayshore.

Additionally, the URA has decided to place a mixed commercial-residential site (in light blue) above Bedok South MRT station. This will likely be the major commercial and community hub of the new Bayshore residential district, which URA has also indicated will be a “car-lite” district.

For Bayshore in the latest Master Plan, the URA has also more clearly defined the park spaces (in green) for the precinct, which will give Singaporeans a seamless connection to East Coast Park. We foresee this will be a laid-back neighbourhood in the manner of Tanjong Rhu, which is further up along the TEL.

Given that the URA Master Plan 2019 did not indicate any major changes to the Greater Southern Waterfront (GSW). With GSW areas still “Subject to Detailed Planning”, it appears that Bayshore will be the more immediate waterfront project that property watchers should look out for.

Like waterfront living? See all homes along the East Coast! 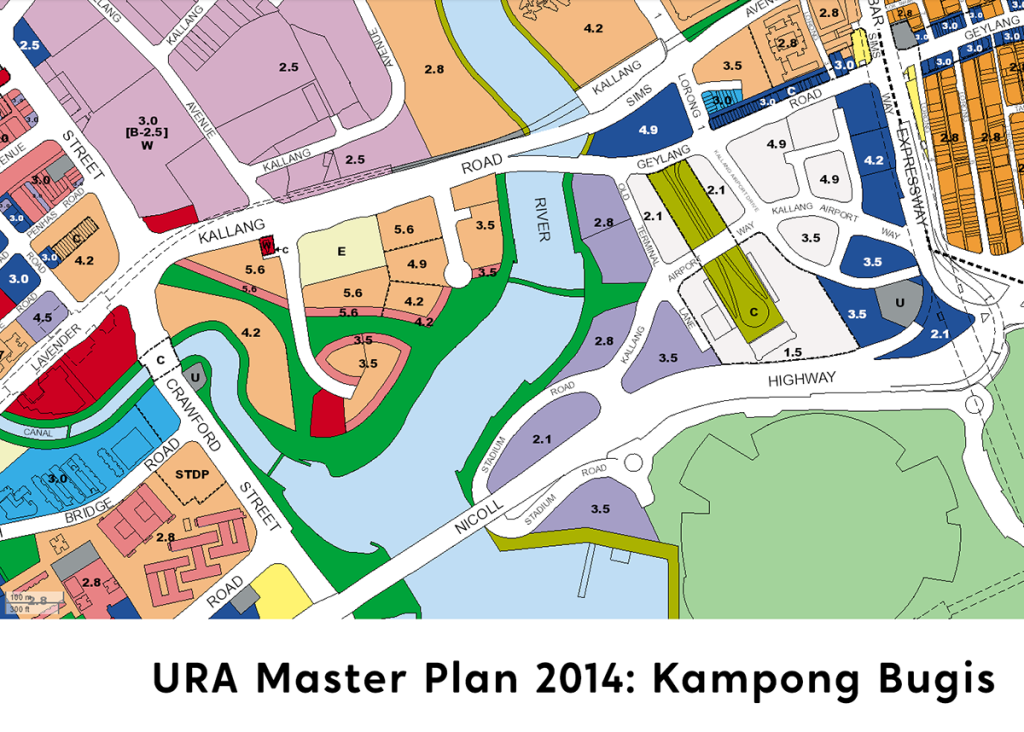 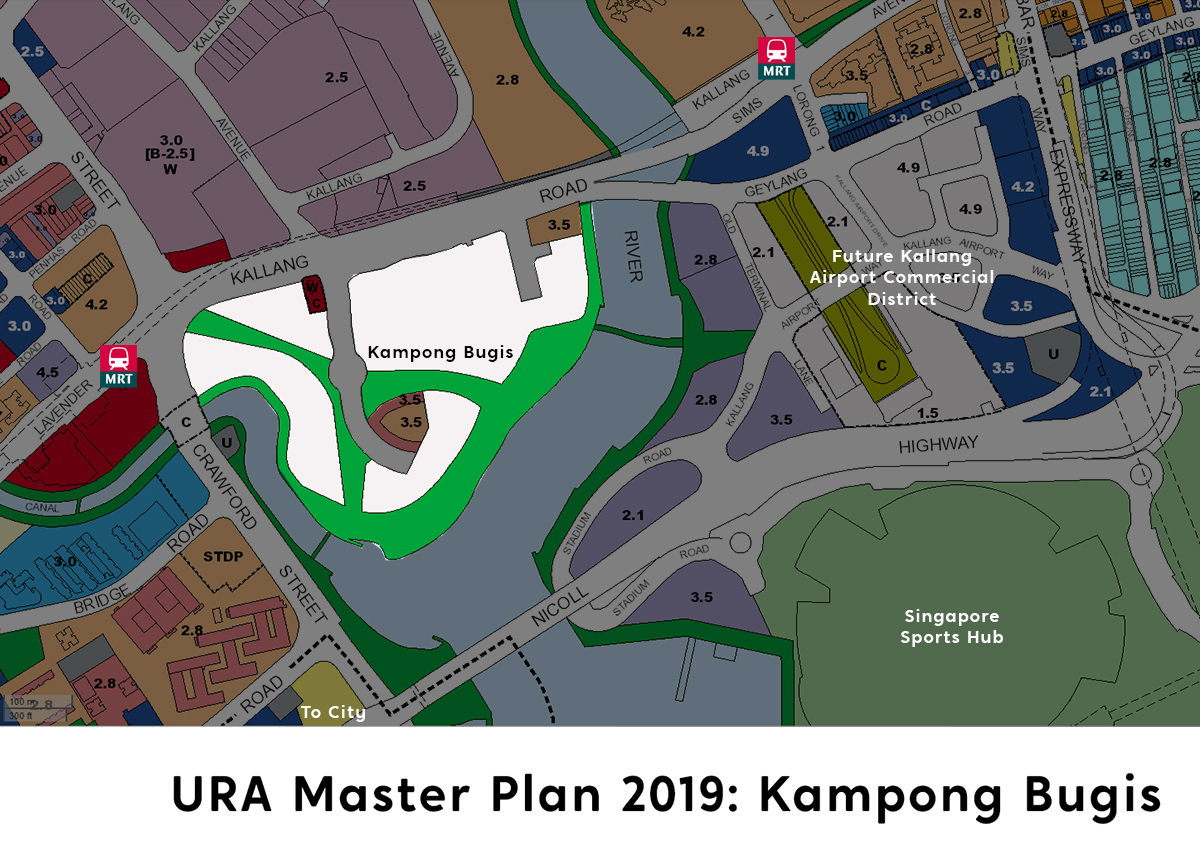 Note: White sites, which are actually somewhat off-white in colour on the map, is a plot of land where a wide range of uses is allowed, although the government will often stipulate a minimum component for a specific use or specific uses to meet planning intentions.
Pink areas denote residential developments with a commercial component on the first storey.

The Background on Kampong Bugis

Another area earmarked for development with significant water frontage is Kampong Bugis. On the western end of Kampong Bugis is the site of the former Kallang Gas Works, where remediation works to remove residual pollutive elements are currently under way.

There are currently TWO existing condos at Kampong Bugis: Kallang Riverside and The Riverine by the Park. The former is a 30-storey, 212-unit project that recently attained its TOP, while the latter was built in 2010, with 29 storeys and 100 units being a short walk away from Kallang MRT. Both condominiums have units offering spectacular views of the city.

Interested to see what it’s like to live here? Browse units for sale at Kallang Riverside and The Riverine by the Park.

What changed in the URA Master Plan 2019 for Kampong Bugis

The 9.20-hectare Kampong Bugis was first envisioned as a car-lite waterfront residential precinct overlooking the Kallang River and Basin in the 2014 Master Plan. Subsequently, the government decided to turn the area into a White Site that’s to be released for sale to a Master Developer.

This decision gives us a clue to the shape and form of the future development at Kampong Bugis, as only a few Master Developer projects exist in Singapore, including Suntec City and Marina Bay Financial Centre. In any case, the White Site is expected to yield 4,000 private homes and 50,000 square metres (sq m) of space for retail, offices, community use, serviced apartments and sports and recreational facilities. The 4,000 private homes is equivalent to about 10 mid-sized condos.

Although the proximity of the Kampong Bugis site to the city and the promise of waterfront living with city should whet a few appetites, the reality is that current market headwinds may deter developer interest given the sizeable cost of developing the site. For nearer-term property prospects, consider looking at Bugis in District 7, where a number of new launches such as Midtown Bay are/will be released in 2019 and 2020. 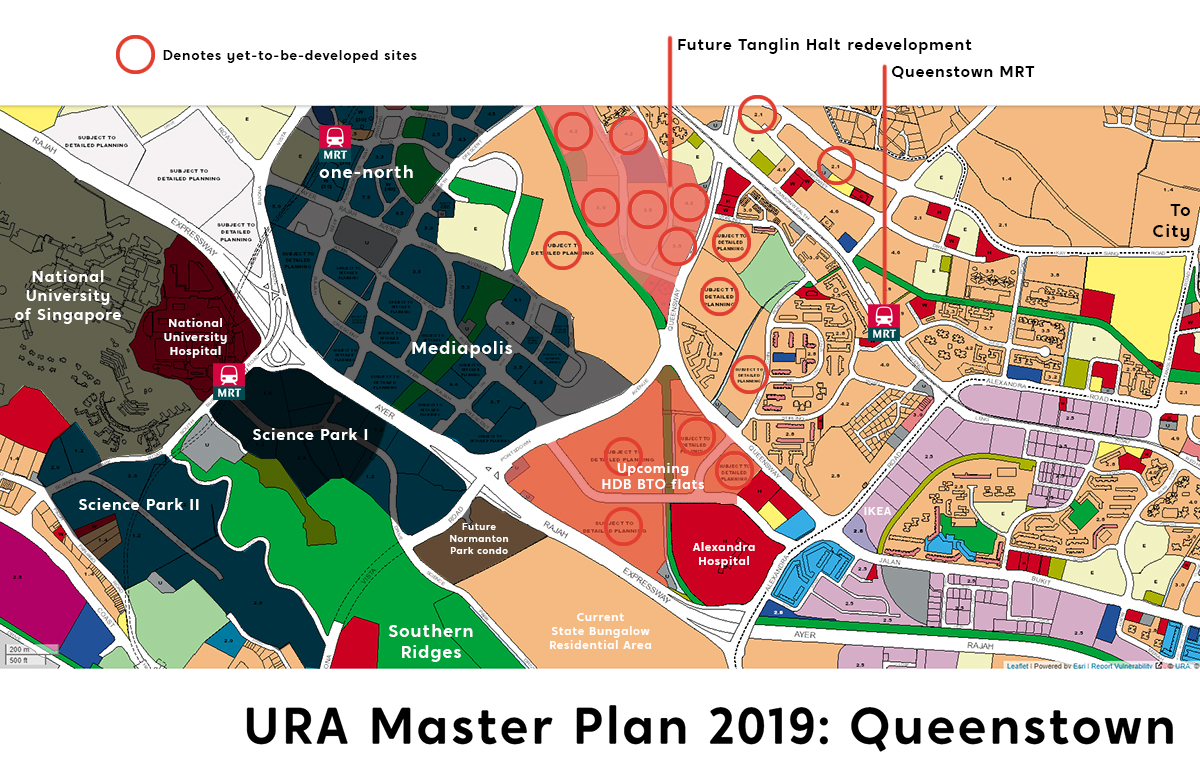 The Background on Queenstown

Recently, the Housing and Development Board (HDB) announced that it plans to build more than 5,000 flats in the Queenstown starting from as early as 2021. One-north, Biopolis and Mediapolis—the area to the northwest of Queenstown (the area in blue)—has also seen enough commercial and office development in the past decade to warrant more housing in the vicinity.

In the past ten years, the estate of Tanglin Halt is being gradually demolished to make way for planned, higher-density housing.

What changed in the URA Master Plan 2019 for Queenstown

At first glance, the changes in Queenstown on the Master Plan seem more like a reshuffling, but there has been an increase in the overall number of residential sites, with a large Education use site on Mei Chin Road rezoned for residential.

Most notably, the URA Master Plan 2019 implies that the MDIS Campus and Residences as well as the Special Operations Command will make way for homes in time to come.

Take a look at what homes are available in Queenstown (District 3) at the moment.

As the number of planned additional residential units in the area could exceed 10,000, it remains to be seen how the government will improve the public transport infrastructure and capactiy in the area to accommodate an influx of new residents.

Regardless, it’s good to see URA taking the Rail Corridor into consideration for the latest Master Plan. Terminating at the future Cantonment MRT station, the Rail Corridor will run through the upcoming residential developments in Queenstown and connect residents directly to the city 5 to 7km away. Perhaps cycling would be the fastest way for future Queenstown residents to get to the CBD!

SERS to make a comeback in Queenstown?

With Queenstown’s Tanglin Halt neighbourhood being the most sizeable Selective En-Bloc Redevelopment Scheme (SERS) implemented thus far, with thousands of households given new flats (mostly in the Dawson neighbourhood) in the process, history could repeat itself. It is likely that some of the planned residential sites in Queenstown could be replacement flats for future SERS flats, considering there are some ageing HDB clusters in the Commonwealth, Mei Ling Street and Lengkok Bahru precincts of Queenstown that HDB might see fit to acquire.

This article was written by Kyle Leung, Digital Content Manager at PropertyGuru.