Developed by the award-winning local developer Koh Brothers, Van Holland is a luxury, 69-unit boutique condominium in the heart of prime District 10’s Holland Village and located with walking distance to Holland Village MRT station via a sheltered overhead bridge.

Slated for completion in the year 2023, the developer has upped the ante of this luxury development with the rarely-seen inclusion of bookmatched marble tiles sourced from Italy’s legendary Mount Altissimo and designer Italian bathroom fittings with Swarovski crystals for all units.

Van Holland is located across the road from the Holland Village lifestyle and dining enclave, which will be expanded to double its size by 2022, providing residents in the area with a lot more leisure, dining and shopping options. The development is also within a fully sheltered, three-minute walking distance from Holland Village MRT. There’s also a bus stop right outside the condo on Holland Road, which offers the fastest public transport route to Orchard Road (under 20 minutes).

Other amenities near Van Holland:

Schools within a two-kilometre radius:

Van Holland’s location: What else we noted

The Circle Line extension will provide residents in the area with a direct route into the city from 2025 onwards, this could widen the appeal of living in the area, especially those looking for an accessible prime location but away from the concrete jungle of the CBD. Besides locals who regard the area well, Van Holland should also appeal to expats who are looking at sending their children to one of the many international schools in the area.

Being so close to Holland Village but not exactly within the hustle and bustle is a big plus to anyone looking for both convenience AND some peace and quiet, especially since the development overlooks the lush patch of greenery and towering trees directly in front of the existing Holland Village shophouses. We also like that major banks (e.g. HSBC, Standard Chartered and Citibank are right opposite the development.

With Holland Village just a street across, residents of Van Holland will never have to worry about finding a parking lot in the popular precinct. 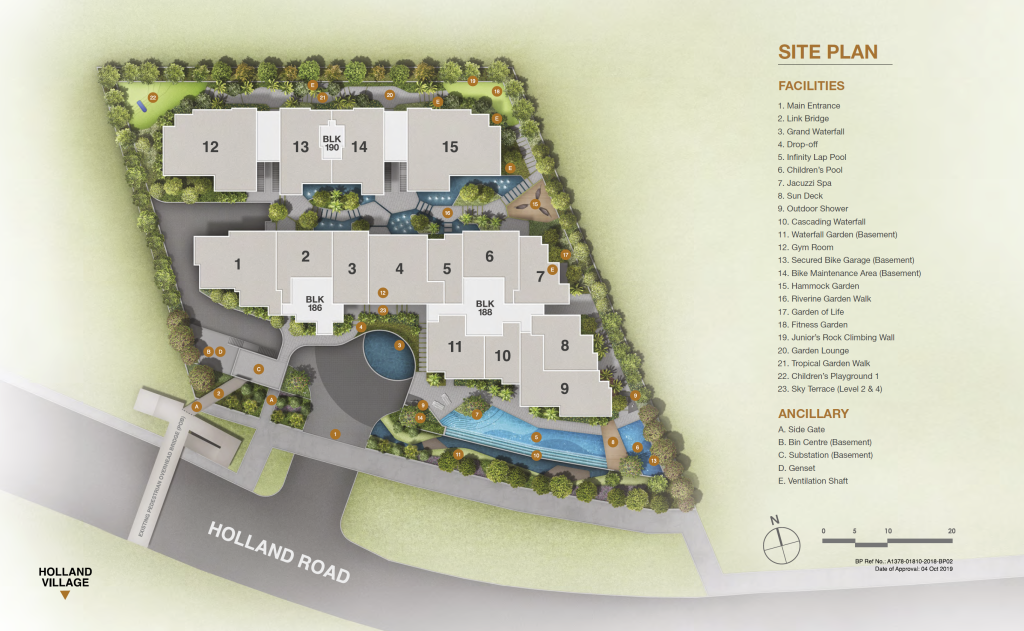 Van Holland is located on the site of the former Toho Mansion along Holland Road (Koh Brothers purchased the site in an en bloc sale in 2018). The new 69-unit development will consist of three low-rise blocks, with units oriented in a north-south direction (with the exception of stack 7 and 8, which is east-facing).

Two of the three blocks, which front Holland Road, are joined. These two blocks will house 54 of the 69 units (1-, 2-, 3- and 4-bedroom types) across five storeys and 11 stacks. Via a second storey sky terrace, residents can also access the elevated walkway that takes them to Holland Village across the road.

The remaining block, situated at the rear of the site, consists of 16 units across four stacks, Comprising of two and four-bedroom unit types, unit in this four-storey block are branded ‘Exclusive’ by the developer and boast a larger floor area and private lifts. Also of note: Two of the four-bedroom units come with attics.

Van Holland site plan: What else we noted

The developer has obtained approval to build a link bridge that joins to an existing footbridge to Holland Village, giving residents direct access to the condo via a security gate. This small but significant feature lets them bypass the bus stop and main entrance at street level, saving them from navigating an additional flight of steps.

Meanwhile, the waterfalls along Van Holland’s façade, including a two-storey high cascade at the main entrance, are clever architectural additions that we feel will provide a sense of separation between the development and the Holland Road thoroughfare, while also serving as a ‘wow’ factor for anyone arriving at Van Holland.

There’s a tendency for smaller condo developments to scrimp on swimming pool size, but Van Holland is a welcome change. Owners can expect two 26-metre lap pools, in addition to a children’s pool, jacuzzi spa and aqua gym area. One of the pools is an infinity pool atop the larger block, with an adjoining Sky Gourmet Pavilion and clubhouse with two full-sized air-conditioned lounges.

For the young ones, there’s also amenities such as a junior rock-climbing wall. The architect has also made full use of the elevation around the condo to create lush landscaping that is reminiscent of natural valleys.

We also like the luxuriously appointed arrival lobby of the condominium. Situated behind the dramatic 10-metre tall waterfall, the entrance additionally features dramatic bookmatched marble walls and sculptural lighting.

Also noteworthy is how the architect has elevated the first floor of the blocks so that all units sit one storey above the Holland Road street level. Additionally, most of the front facing units are separated from Holland Road by a lap pool and waterfall—a design that ensure all units retain a sense of exclusivity and tranquillity in sight and sound despite being physically at the doorstep of Holland Village.

Van Holland’s offers a range of unit types from one- to four-bedroom units, but the biggest difference here is the collection of 16 Exclusive units that are located in the same block. These units have private lifts and foyers.

Ceiling height: Throughout the development, all units will have a 3.1-metre ceiling height in the living areas and bedrooms (including all balconies). (Above 3 metres is considered par for the course for luxury developments.) The ceiling height at the foyer will be 2.75 metres, whereas bathroom ceiling heights measure 2.6 metres.

Van Holland Floor plan and unit layout: What we like

Overall, we find that common bedrooms at Van Holland are good-sized and can fit a queen bed without having to flush it against the full-height windows.

The 4-bedroom Exclusive units are also well thought-out, each with a powder room and a generously sized dry kitchen that provides a fitting stage for luxurious home parties. For units with an attic, this is where the master bedroom is located. It is worth highlighting that the private lift also serves the attic, which heightens the appeal of the ‘Attic’ unit configuration.

Stack 10’s 495 square feet (sq ft), one-bedroom layout enables the owner to create a wall of storage at the foyer area extending to the kitchen. We also like the unit’s pool views and that it offers a good vantage over the Holland Village shophouses from the living room balcony and bedroom. We also like that the one-bedroom units offer a retractable sliding door between the master bedroom and living room, which offers flexibility in layout by letting the resident separate or merge fully the two spaces.

We also like the Stack 07, 689 sq ft two -bedroom and the Stack 09, 1,152 sq ft three-bedroom layouts for the abundance of natural light the units will receive. The unit layouts also lets the owner decide whether to leave the kitchen open, enclosed, or semi-open.

For Stack 09, we also think that locating the washer-dryer in the centre of the house is a masterstroke.) Overall, the architect should be applauded for keeping wasted corridor space in the three-bedroom units to a minimum.

Also keep a lookout for three-bedders in the condo with wraparound full-length windows for the master bedroom. 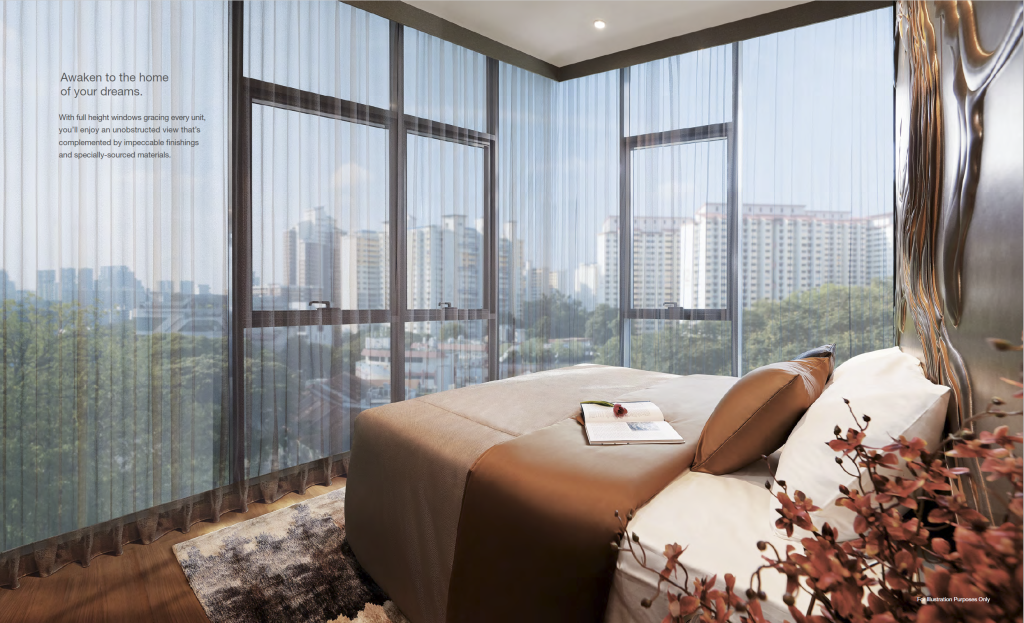 Characteristic with luxury developments, Van Holland units come with premium interior finishes, fittings and appliances, including Miele combination ovens, dishwashers and hobs, Duravit bidets and sanitary wares, as well as smart home features that let residents access a variety of functions and services via their smartphones.

The developer has also decided to embellish the usual chromed bathroom fittings with Swarovski crystals. While this might stylistically not be everyone’s cup of tea, these are admittedly valuable pieces that are made in Italy by tastemakers F.lli Frattini.

Sourced from Italy’s Mount Altissimo quarry, the large-slab marble tiles used in Van Holland’s units are bookmatched, which means that they cut from the same slab of stone and laid out in a manner that forms a distinctive mirrored pattern. This attention to detail on the part of the developer is not something we see nowadays, and we applaud them for going to such an extent to position Van Holland as a luxury condo.

Aside from the bookmatched marble floor, we also admire the black marble used for the bathroom walls. We also like how the developer has incorporated details such as an in-wardrobe dehumidifier and pull-down hanging rail that optimises the use of space of the high ceiling.

The developer, Koh Brothers, has announced the indicative price for Van Holland to be from the $2,6XX range onwards.

There’s always demand for luxury boutique developments in prime lifestyle precincts, and Holland Village is no exception. With Van Holland, Koh Brothers have come up with some attractive unit layouts and enough facilities to stand out from the competition. The developers’ stellar reputation as builders may also play to its advantage in a crowded playing field. And it’s freehold, too, with a pricing that we feel is very competitive given its attractive location.